END_OF_DOCUMENT_TOKEN_TO_BE_REPLACED

SILVER BULLION outpaced gold prices yet again on Thursday morning in London, touching what analysts called "strong resistance" at $18.13 per ounce as world stock markets retreated from new all-time highs.
Gold set a 1-week high at $1239 per ounce, but silver bullion recorded its first London benchmarking above $18 since mid-November, immediately after Donald Trump's victory in the US presidential election.
Global equities meantime touched a new all-time record on the MSCI World index after another record-high Wall Street close. But European stock markets then retreated as the Euro rose for the second day running against the Dollar.
Copper prices edged back but held their  "breakout" from the metal's 5-year downtren as talks to end a strike at BHP Billiton's giant Escondida mine in Chile were postponed until at least Saturday.
Silver's price rise, outpacing gold bullion and adding almost $2 per ounce so far in 2017, pushed down the Gold/Silver Ratio of the two precious metals' prices to 68.3 this morning, falling from the New Year's peak at 71.5 ounces of silver for each ounce of gold.
Near a 5-month low for gold's value relative to silver, Thursday morning's reading held right in the middle of the Gold/Silver Ratio's trading range of the last 30 years.
Finding half its annual demand from industry, versus less than 10% for gold, silver broke its 5-year price decline relative to the yellow precious metal in mid-2016. 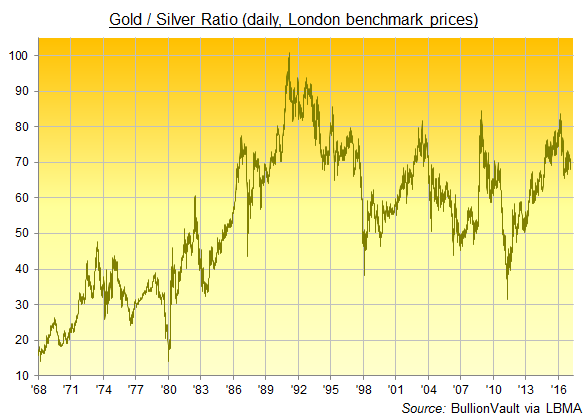 "The industrials remain well bid," says a note from Swiss refining group MKS's Asian desk, "[with] silver still probing the $18.00 level.
"Strong resistance [is] sitting at $18.13...the July 2016 to Feb 2017 downtrend line."
Looking at the breakout in copper prices, "Equity prices boomed during the copper bear market," notes French investment bank Societe Generale's global strategist Albert Edwards.
"[So] it beggars belief how equity investors have flipped from seeing the deflationary backdrop...as good for equities, to rising bond yields and commodity prices also being good for equities.
"The breadth of base metal price increases is of particular note...with five of the metals up a steamy 30% over the past year and zinc turning in a sparkling 70% performance."
Gold prices in China rose Thursday to 1-week highs against the Yuan, helping Shanghai premiums – over and above London quotes – hold at $12 per ounce.
More than 4 times the typical incentive to new imports, Thursday's premium extended the strongest post-Lunar New Year stretch since China's record gold demand of 2013.
Major government bond prices meantime recovered as equity markets slipped back, rising after yesterday's strong US inflation data followed Federal Reserve chief Janet Yellen hinting that the next Fed rate hike will come sooner than later.
Betting on US interest-rate futures jumped to put the odds of a March rate hike at 31% on Wednesday, up from 18% the day before.
Betting on forthcoming Fed decisions now sees the odds of a rise in or before May's meeting as greater than evens – one month sooner than previous market-based forecasts.