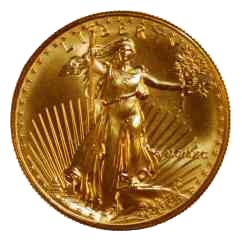 For most purposes there is a safer, easier and cheaper way to buy than coins.

The attraction of bullion gold coins is that they retain near full value regardless of either change of government or being transported outside their country of issue.

These are not 'numismatic' gold coins. Bullion coins are not rare, and their value is simply computed by multiplying their gold content by the price. Numismatic coins on the other hand are rare coins and are considered collectibles. Numismatic gold coin prices are more volatile than bullion coin prices, because their prices move both with the changes in value of bullion gold, and with the emotions of coin collectors.

Gold coins were hardly produced anywhere between 1933 and 1965. Then, once the private demand for gold ownership had been nearly extinguished, it was finally the South Africans who started minting again in earnest from 1967.

As you can see, several governments are now minting gold coins again.

Generally these gold coins are not available direct from the producing mint. Instead the mints have arrangements with distributing sales agents who deal with the public. The mints themselves take a premium over the gold content (known as seignorage), and the agents add a further intermediary margin.

There is nowhere in the world that any of these gold coins circulate as money.

Many gold bugs struggle to understand why gold is not a popular and widely circulating medium of exchange. Gresham's law explains it.

Imagine you had a pocket full of fast depreciating dollars (or any other currency), and a gold coin. You are about to pay for something and both are accepted by the merchant. Which do you choose?

That's all there is to it! Bad money is losing value all the time, so people wisely spend it, and save the good money. Not being used does not mean that gold coins are somehow inferior to bank-notes: quite the opposite in fact. It means that their good wealth storage characteristics means they don't circulate.

The result is self-reinforcing. Where there are lots of fast depreciating bank-notes about few people ever handle a gold coin, so they stop even accepting them when they are offered. They soon neither recognise the gold coin offered nor understand its value.

Then what tends to happen is that the skill to deal in gold coins (without getting duped by fakes) concentrates on a few expert gold coin dealers, and that increases the cost of dealing. They benefit from the value of their specialised knowledge, and you pay for your lack of it.

Then, when it comes to sell, you will have to accept a substantial discount for your gold coins too. That might cost you another 2-6%

Meanwhile should an economic meltdown occur your gold coins would probably not be very useful. One possibility is that they would be subject to compulsory purchase (confiscation) by a government at a significant discount to their real value - as happened in USA in 1933. Then the owner has either (i) to surrender his gold coins for a loss, (ii) to store them secretly, unused and unusable, or (iii) to dispose of them - dangerously - through illegal channels to underground gold coin traders, who will pay only a deeply discounted price.

Perhaps more likely - and indeed this has been the case for most countries for most of history - exchange controls will be re-introduced. You cannot carry or ship gold out of a country which is under exchange controls.

This is why people who understand the issues choose to store only a small emergency reserve as bullion gold coins. They expect to use them only in extreme circumstances. They put the bulk of their gold denominated wealth store offshore, and usually as close to a professional and highly liquid bullion market as they can. You too can do this using BullionVault.

If you can own gold in a country whose currency is not in crisis, which has a solid tradition of protecting foreigners' property rights, whose politics are stable, and whose enemies are few, then your gold will in almost all circumstances offer you better protection there than if you store it domestically.

That is why your gold coin purchase should be treated as your emergency reserve, and not as your strategic store of wealth.

Tell me more about the smarter way to buy gold.

The underlying value of gold bullion coins is calculated by multiplying the coin’s gold content by the current price of gold in the buyer’s chosen currency. While a buyer (or seller) must then allow for retailer mark-ups (or dealer discounts) totaling 3-8% or more, this means that how much a gold coin is worth changes with the live ‘spot price’ of gold, which you can track using BullionVault’s live gold price chart.

The value of ‘numismatic’ gold coins has less direct relationship with the wholesale bullion market. Their worth is dictated by the coin's rarity, its collectability, and also buyer sentiment, rather than by their pure gold content. This means it may be less prone to fluctuation short term.

Because all 1 oz bullion coins will contain 1 ounce of fine gold, the underlying value is the same whichever gold coin you choose. Different coins may seem better or worse however when you consider the 'spread' between prices to buy and prices to sell, because buyers must pay a mark-up, above what the gold coin is worth, and sellers will typically get back less than that value.

The value of gold coins is calculated by multiplying the coin’s gold content by the current price of gold in the buyer’s chosen currency. Therefore, the ‘spot price’ value of all 1 oz gold bullion coins with the same pure gold content will be the same. However, the first 1-troy ounce gold bullion coin minted was the South African Krugerrand, which remains one of the most popular gold coins in the world.

For UK taxpayers, the 1-ounce Britannia can seem the best gold coin to buy, because it is free of capital gains tax when you sell. But that's almost always a red herring for UK investors, because the extra costs you pay to buy and sell Britannias soon eat up any of the likely benefit for most people.

Investing in gold is typically seen as a good way of hedging against risk as part of a balanced portfolio. Gold bullion coins tend to track the professional bullion market's pattern of increasing in value as other investment assets fall during financial crisis or economic downturns.

However, the gap between prices to buy and prices to sell can be wide, running to 10-15% on some coins. This cost should be factored in when considering gold coins as an investment.

Collectible gold coins – known as numismatic coins – find their investment value dictated more by their rarity and trends in collecting rather than by their pure gold content.

It depends which country you live in. No banks sell gold coins in the UK for instance, and banks that sell gold coins are few and far between in the USA or Canada. But Germany's banks often make it possible to buy gold bars or coins at their local branches.

While banks may not sell gold coins where you live, many national mints produce gold bullion coins as well as rarer, limited edition gold coins. For example, the Royal Mint produces both a regular version of its gold Sovereign coin as well as commemorative editions, such as the 2012 Royal Mint gold sovereign coin, minted to celebrate the Queen’s Diamond Jubilee.

The karat system is used most often in jewelry. But many 1-ounce bullion coins are 24 karat - sometimes called 24 carat - which means they are 99.99% pure gold or better. These 24 karat gold coins include UK Britannias, American Buffalos, Australia's Kangaroo, Austrian Philharmonics, and Canadian Maples.

While the 24 karat gold coins have what's known as 9999 millesimal fineness, other very popular coins like the British Sovereign and the American Eagle, are 22 karat = 0.9167 fine.

Large wholesale bullion bars must be 995 parts per 1,000 pure gold. But here, in the professional market, you only ever pay for the fine gold content. No one ever pays for the other 5 parts per thousand.

As explained above, owning wholesale bullion in a market-accredited vault is the safer, cheaper and easier way to own gold, silver, platinum and palladium. That said, we recognize that some people also like to keep a little bullion at home, and so we now enable UK users to buy gold coins.