END_OF_DOCUMENT_TOKEN_TO_BE_REPLACED

GOLD PRICES edged higher in all major currencies Monday in London ahead of a wave of central bank decisions this week, with interest-rate traders now pricing in potential 3 rate hikes from the US Federal Reserve in 2022, writes Atsuko Whitehouse at BullionVault.
Other analysts however expressed concerns over the flattening yield curve, with longer-term interest rates falling as shorter-term yields rise.
Gold prices in the US Dollar edged up by 0.1% to $1784 per ounce, while wholesale bullion in the spot market rose 0.3% to £1347 for UK investors and 0.5% to €1586 for European investors.
The Federal Reserve starts its two-day meeting tomorrow and will announce its latest policy stance on Wednesday 15 December, expected to include speeding up the end of its QE bond-buying program.
Many analysts think that if the Fed decides to taper its bond purchases more quickly, it could also begin to raise interest rates faster next year.
Another 22 central banks are also due to hold policy meetings this week, including the Bank of England and the European Central Bank on Thursday and the Bank of Japan on Friday.
The fed-funds futures market is pricing in the first US rate rise for June, according to the CME FedWatch website, and most academic economists polled by the Financial Times believe the Fed will raise its key rate by at least a quarter of a percentage point before July 2022.
However, almost 70% said the Fed's main policy rate would not exceed 1.5% by the end of 2023, suggesting a gradual pace of interest rate increases from today's near-zero levels.
"Rate boosts would be a major policy blunder by the Fed," says Scott Minerd, global chief investment officer at Guggenheim Investment, pointing to the flattening yield curve.
"The risk is that the US will have a recession in 2023," Minerd warned. 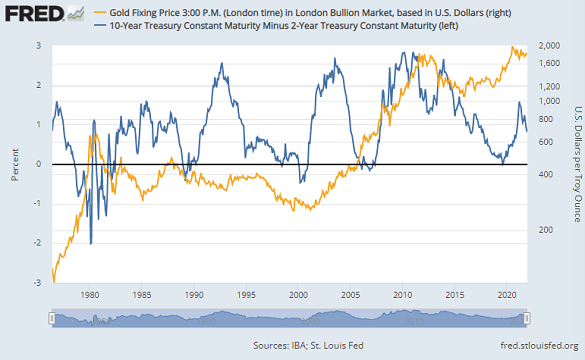 The yield spread between 2-year and 10-year Treasury bond yields narrowed to the smallest in a year at the start of December after November's "disappointing" US jobs data was published.
Reaching 75 basis points, that was down from 113bps just a month ago, and has since steadied to 80bps today.
"The yield curve is a leading indicator of the economy," says Julia Coronado, president of MacroPolicy Perspectives LLC in New York.
"It doesn't get everything right, but you wouldn't, also, want to completely ignore it."
The real interest rate implied by inflation-protected 10-year TIPS bonds meantime edged down Monday to minus 1.02% per annum, a level reached for the first time when gold prices hit their current all-time highs above $2000 per ounce in August 2020.
Today's drop in implied real interest rates across the next decade comes after Friday saw November's official US inflation estimate match analyst expectations at 6.8%, the highest since 1982.
In contrast to the Federal Reserve's widely expected announcement of tighter monetary policy to come on Wednesday, the Bank of England is now expected to repeat last month's dashing of expectations to hike rates when it speaks Thursday after the UK on Sunday raised its Covid threat level, with Prime Minister Boris Johnson warning of a "tidal wave" of Omicron.
The pullback in Bank Rate expectations sent the Pound skidding to a 12-month low last week, while the yield on 10-year UK Gilts was little changed at 0.74%.
Meanwhile, Eurozone government bond yields edged lower on Monday, ahead of the European Central Bank's Thursday decision, which could provide more details of how it will unwind its pandemic emergency purchase programme (PEPP), due to end in March.
"The current fourth wave of the pandemic and the new Omicron variant will add further downward pressure to the Eurozone economy," ING economist Carsten Brzeski said, while pointing out that headline inflation has continued to accelerate.
"The ECB has a difficult balance to strike, he thought it unlikely that PEPP will get an extension, given comments by ECB chief Christine Lagarde and others."
"A postponement of the decision until February is possible," he added.