END_OF_DOCUMENT_TOKEN_TO_BE_REPLACED

GOLD PRICES fell below $1300 per ounce for the first time in 15 weeks in London Tuesday lunchtime, hitting their lowest level since late-June's UK Brexit referendum as world stock markets rose with bond prices and commodities fell.
Silver fell with gold prices, but held 15 cents above its August low of $18.40 per ounce.
Having dissented from the 6-3 majority and voted for a September rate hike, US Federal Reserve member Loretta Mester yesterday affirmed her view that a second rise after last December's "lift off" now looks "compelling".
US jobs data for September are due from the private-sector ADP estimate tomorrow, and then from the Bureau of Labor Statistics on Friday.
"Gold is closing in on pivotal support of $1307 [to] $1300," said an earlier technical analysis from Stephanie Aymes' team at French investment and bullion bank Societe Generale, staying bullish and forecasting a rise to $1352 or higher over the next 1-3 months.
"Gold continues to trade near the bottom of its range," said a morning trading note from David Govett at London brokers Marex Spectron, pointing to "murmurings of Fed rate rises in December or even as soon as November.
"I would not be surprised if we break lower." 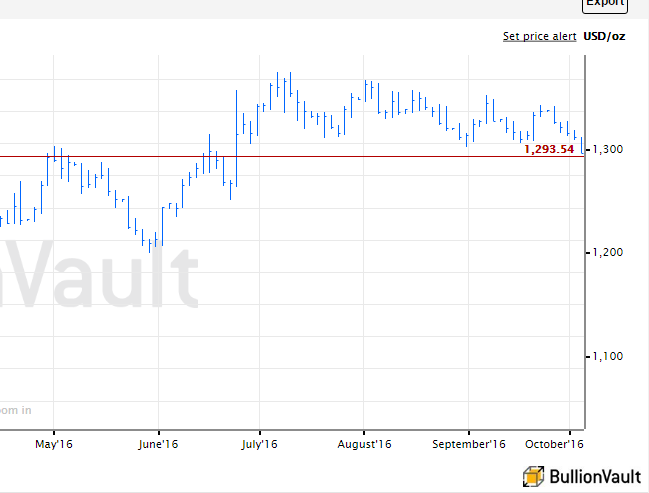 With China closed all week for the National Day holidays, gold prices slipped overnight in Asian trade, dropping towards the summer's floor near $1300 per ounce for the fifth time since the Brexit result saw the metal surge to 2- and 3-year highs against most major currencies.
Dollar gold prices then sank 1.1% inside 30 minutes as the start of US trading drew near.
Only the British Pound price of gold held above its summer 2016 floor, trading in the middle of its post-Brexit range, some 3.2% above August's low.
"A financial environment characterized by low inflation and weak global growth will likely sustain accommodative central bank policy and historically low real yields, supporting the precious metals sector," reckons a note from commodity analysts at troubled German financial services giant Deutsche Bank.
"While we expect the Fed to hike rates in December," says a note from Swiss bank and bullion market maker UBS, "we continue to think US long-end real yields [after accounting for inflation] have room to fall further, supporting our positive gold view."
"What ultimately matters for gold are real rather than nominal yields...[and] the market's perception on whether the Fed is behind or ahead of the curve."
"Central bank policy is driving markets and keeping asset prices high," says Suzanne Hutchins of the UK's Newton Real Return fund, "but this could all break down as it is stretching fiat currency to its limit."
Hutchins now holds 11% of her clients' £9 billion in gold-backed ETF trust funds and gold mining stocks. The fund currently shows a 16% gain from 2013 to outperform its 'targeted absolute returns' investment fund benchmark, but is dead-flat for both the last 1 and 3 months on data from TrustNet.
Bullion needed to back the number of shares outstanding in giant gold ETF product the SPDR Gold Trust (NYSEArca:GLD) held unchanged Monday at 947 tonnes, a 3-year high when reached the day immediately after the UK's Brexit referendum decision on quitting the European Union.