END_OF_DOCUMENT_TOKEN_TO_BE_REPLACED

GOLD PRICES dropped back on Monday morning in London ahead of several key central bank meetings this week, writes Steffen Grosshauser at BullionVault.
Rumors in Tokyo say the Bank of Japan may 'tweak' its QE asset purchase scheme Tuesday.
Supported by last week's strong US GDP data, the Federal Reserve is then expected to restate its plan for 2 more rate hikes in 2018 on Wednesday.
The Bank of England is now widely expected to raise UK base rate by 0.25 points on Thursday.
Gold today slipped 0.3% from last week's close at $1224 per ounce but fell harder for non-Dollar investors, while silver traded in a narrow 10-cent range below Friday's finish at $15.51.
Ahead of this week's central bank news, latest data released Friday said that hedge funds and other 'Managed Money' traders in Comex gold futures and options held a record net bearish position overall.
In the week-ending 24 July, those leveraged speculators increased their short position, net of bullish bets, by 23% to the equivalent of 84 tonnes of metal, the heaviest net negative betting since current records started in 2006, according to US regulator the Commodities Futures Trading Commission (CFTC). 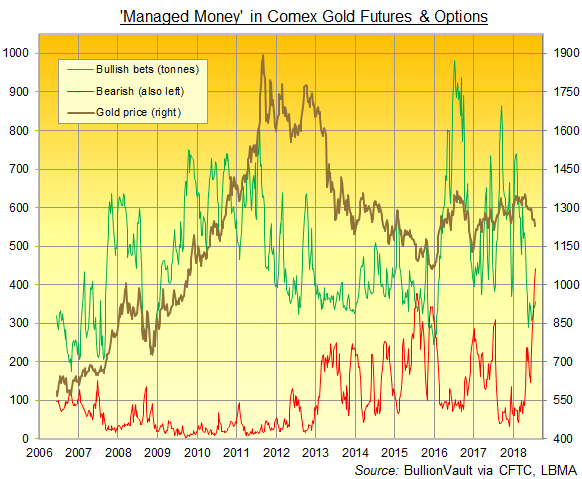 "Beyond the current weakness," says a fundamental note from investment and London bullion market-making bank Standard Chartered, "we expect prices to recover as USD strength fades and strong seasonal demand materializes in India in September given the good monsoon forecast."
"[Speculative] positioning remains heavily skewed to the short side," says a trading note from Swiss refining and finance group MKS Pamp, "with non-commercial shorts remaining close to record highs.
"There could be a possibility of a relief rally on the horizon [but] we still believe it is very much a Dollar play."
Most global stock markets started this week lower, with European shares drifting down from Friday's 6-week high.
The British Pound meantime slipped against the Euro but rose versus the Dollar on Monday morning, edging the UK gold price in Pounds per ounce down to new 2018 lows just beneath £930.
The US Dollar earlier hit fresh 13-month highs against the Chinese Yuan, "putting pressure on gold prices" according to a trader in Hong Kong.
As Comex speculators extended their bearish betting last week, the SPDR Gold Trust (NYSEArca:GLD) held little changed in size, with investor demand growing the fund to need an additional 2 tonnes of backing at 800 tonnes, the second weekly gain in a row after four outflows.