END_OF_DOCUMENT_TOKEN_TO_BE_REPLACED

GOLD PRICES jumped 2.0% against the US Dollar inside 20 minutes Friday as new data shocked analysts, economists and traders by showing the weakest monthly US jobs growth since 2010 and putting a June rate-hike from the Federal Reserve further in doubt.
Betting on interest-rate futures slashed the odds that the Fed will hike on 15 June to 0.75% from the current 0.50% level – reached after 7 years at zero in December – from above 1-in-5 to below 1-in-25.
Touching $1237 per ounce, gold outpaced base metals – as did silver, up 2.0% following the Non-Farm Payrolls data from the Bureau of Labor Statistics – and then held more of its jump too.
Friday's official jobs data said the US added only 38,000 jobs in May, missing Wall Street's consensus forecast by 126,000 with April and March's earlier estimates also revised down by 59,000 in total, a cut of 16%.
New York stockmarket futures pointed sharply lower and European equities slashed earlier strong gains.
Base metals also jumped as gold and silver rose, with copper adding 0.7% before reversing all that move inside 30 minutes of the BLS release.
Employment in the communications sector fell 37,000 last month on the BLS data thanks to a strike over pay, out-sourced jobs and contracts by workers at the Verizon telecoms giant which began mid-April and ended Wednesday with what the CWA union called "big gains" for its members.
"Even without the Verizon strike, payrolls would have increased by a mere 72,000," notes the Reuters news and data agency.
The Euro also jumped against the Dollar, reaching a sudden 2-week high above $1.12 on the FX market.
Gold priced in Euros still rose sharply, recovering all of the week's earlier 1.1% loss and more to trade at €1095 per ounce.
The gold price in Japanese Yen barely moved, however, as the Dollar sank near 1-month lows beneath ¥108.
"ETFs are starting to see inflows again," said a note from London brokerage Marex Spectron ahead of Friday's US jobs data, pointing to another rise in the amount of gold needed to back exchange-traded trust fund investment vehicles.
The giant SPDR Gold Trust (NYSEArca:GLD) added a further 4.5 tonnes yesterday, taking its total holding to 875 tonnes.
Equal to some 27% of last year's record-high global gold mine output, that marked a new 31-month high in the GLD's holdings.
"[This] suggests," said Marex, "that investors think prices are cheap down here [at Thursday's low of $1206] and there is a small stirring in physical demand as well."
Average wage growth held at 2.5% annually on the new US jobs data, and the official unemployment rate slipped to 4.7% – its lowest level since October 2007. 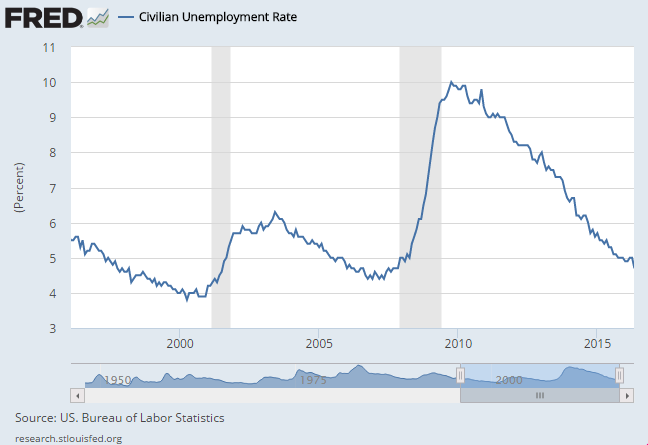 "Despite the drop in unemployment," said US president Barack Obama earlier this week, " wages are still growing too slowly, and that makes it harder to pay for college or save for retirement."
Employment in goods production, which includes mining and manufacturing, lost 36,000 jobs in May, the most in more than 6 years.
Renowned US Fed "dove" Charles Evans – a non-voting  member in 2016 – said overnight in a speech in London that while "it may be appropriate" to raise interest rates twice in 2016 as forecast by his committee colleagues, "a reasonable case can be made for holding off increasing the funds rate until core inflation actually gets to 2% on a sustainable basis."
Stripping out fuel and food, CPI inflation rose to 2.1% per year in April, but on the US central bank's own forecasts, a "sustainable" 2% pace would leave US interest rates at the current 0.50% level until 2018.