END_OF_DOCUMENT_TOKEN_TO_BE_REPLACED

GOLD PRICES moved sideways in quiet trade on Monday as the Dollar held firm ahead of this week's widely-expected interest-rate rise from the US Federal Reserve.
Moving barely 1% away from $1200 per ounce over the last month, gold again stuck to that price as world stock markets slipped.
Tokyo and Shanghai were closed for mid-autumn festivals, but on the political front Beijing cancelled planned talks with Washington amid the worsening US-China trade war, with both sides imposing new tariffs last week.
"Gold traditionally trades poorly ahead of anticipated Fed hikes and the Dollar will have an upper ground," says FX platform Oanda's Stephen Innes.
Ahead of this Wednesday's Federal Open Market Committee (FOMC) decision, betting against gold prices by hedge fund and other 'Managed Money' traders last week grew for the 10th week running on Comex futures and options, according to US regulator  the CFTC's data series.
Net of that group's bullish bets, the speculative short position grew 4.2% – reaching a notional equivalent of 231 tonnes – but held below the fresh series record hit at the start of September. 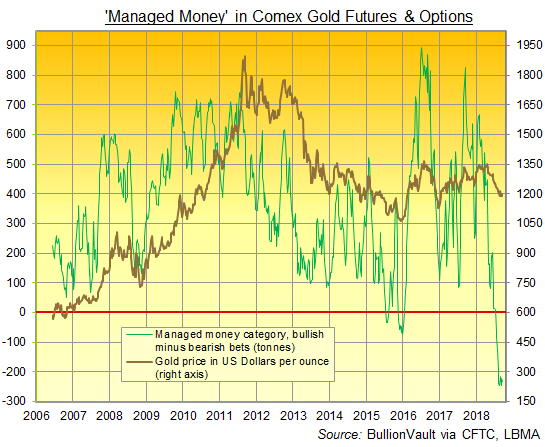 Gold mining shares edged higher on Monday after No.1 producer Barrick (NYSE: ABX) announced a merger with No.15 miner Randgold Resources (LON: RRS) in a deal valuing the new joint business at $18 billion.
"The combination will create a new champion for value creation in the gold mining industry," says Barrick CEO John Thornton.
Focused on central and western Africa, Randgold will be de-listed from the London Stock Exchange, and its shareholders paid in North America-listed Barrick stock.
Friday saw the launch of billionaire hedge-fund manager John Paulson's new Shareholders Gold Council – a lobby group aimed at pushing mining bosses to curb executive spending and focus on boosting returns to equity investors.
The UK gold price in Pounds per ounce meantime slipped 0.5% to £913 on Monday as Sterling rallied despite fresh political wrangling over both the Conservative Government and opposition Labour Party's plans for Brexit.
Attendees of Labour's annual conference will this week vote on pushing for a second referendum on the 2016 decision – a so-called "people's vote".
Pro-Brexit politicians today put forward an alternative Brexit plan to the so-called "Chequers deal" offered by Prime Minister Theresa May and rejected by European Union leaders last week.