END_OF_DOCUMENT_TOKEN_TO_BE_REPLACED

GOLD PRICES fell on Monday morning in London, retreating against all major currencies as global stocks hit new highs and major government bond prices fell amid growing expectations that the US Federal Reserve will tighten its monetary policy at this week's meeting, writes Steffen Grosshauser at BullionVault.
With US Treasury bond yields rising, non-interest bearing gold dropped another $7 per ounce from last Friday's close of $1320, reaching its lowest level so far in September after touching 12-month highs only a week before.
The US Dollar stabilized ahead of the 2-day Fed meeting starting tomorrow, at which the US policymakers are expected to announce a plan for trimming their $4.5 trillion balance sheet of QE bond purchases, while keeping interest rates unchanged at 1.25%.
Traders now see a 53% probability of a rate hike in December, according to the CME's FedWatch tool.
"Gold prices [have come] under some selling pressure," says Australian bank ANZ's analyst Daniel Hynes, "with investors dismissing geopolitical risks and instead focusing on the possibility of rate hikes from central banks."
"The FOMC's latest verdict will be of special interest," agrees analyst Daniel Lenz at DZ Bank in Frankfurt.
"The Fed could well set the balance-sheet-reduction process in motion" when Janet Yellen's team publish their decision on Wednesday.
Silver meantime tracked gold prices lower today, falling back below $17.40 per ounce – a near 3-month high when reached at the end of August, and some 4.5% below early September's 5-month peak. 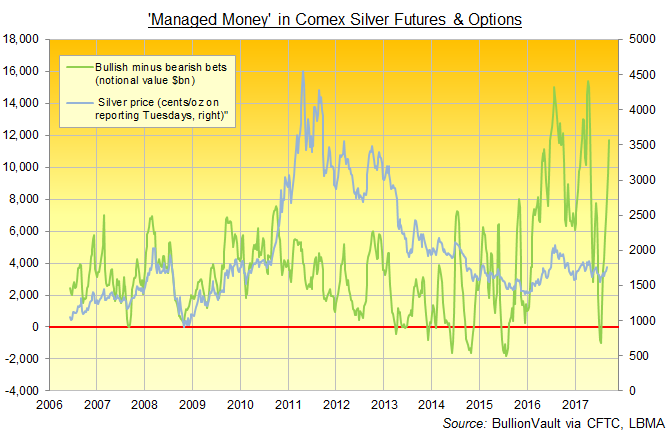 New data from US regulator the CFTC say that hedge funds and other professional speculators last week grew their bullish betting on silver prices to the highest Dollar value since April.
As of last Tuesday, and net of bearish bets, the so-called 'Managed Money' category raised its notional position in Comex silver futures and options to $6.7 billion, up more than one-fifth from the Tuesday before and the eighth weekly gain in succession.
The Managed Money's net speculative long position on Comex gold prices also rose, expanding to a notional 12-month record above $35bn.
Holdings for the largest gold-backed ETF, the SPDR Gold Trust (NYSEArca:GLD), meanwhile expanded by 4.2 tonnes in the week-ending Friday, recovering most of the previous week's small outflow to need 839 tonnes of bullion.
Friday's new record highs in US stock markets today saw Asian shares hit their highest in a decade overall.
The pan-European Stoxx index also rose, led by Portuguese stocks after Lisbon's credit rating was upgraded back to 'investment grade' for the first time in more than 5.5 years.
Brent crude oil today rose to $55 per barrel, just a few cents shy of the 5-month high it touched last Thursday.