END_OF_DOCUMENT_TOKEN_TO_BE_REPLACED

GOLD TRADING in wholesale bullion and ETF trust funds saw global prices rise Friday towards the best weekly close in 12, gaining together with European and New York stock markets as the Dollar retreated following stronger-than-expected US jobs data.
With Wall Street expecting 175,000 net hires across the world's largest economy for January, the Bureau of Labor Statistics today put its first estimate at 227,000.
The number of people actively looking for work also rose, nudging the jobless rate slightly higher to 4.8%.
Gold traded up to $1216 per ounce as the weekend approached in London, some 2.0% higher from last Friday's finish, with exchange-traded gold ETF funds rising alongside.
Gold traders in China had earlier returned from the week-long Lunar New Year holidays – now the world's single busiest period for retail gold demand, overtaking India's Diwali since 2012 – to find bullion prices 1.3% higher in Dollar terms.
Chinese stock markets welcomed the new Year of the Rooster with a 0.7% loss, and gold trading volumes were quiet in Shanghai, where the daily benchmark price fixed at its lowest premium in 3 months above comparable London quotes.
At nearly $6 per ounce however, that was still over twice the typical incentive to import new bullion shipments from the world's central storage hub to its No.1 consumer nation.
China's household gold demand fell 7% in 2016 according to new full-year data published Friday by mining-backed market-development organization the World Gold Council.
But China still doubled its lead over historic No.1 India in tonnage terms as the subcontinent hit regulatory and economic blocks to buying gold, peaking with November's shock demonetisation by the government of 86% of all currency in circulation.
Helping dampen consumer demand worldwide, Dollar gold prices rose in 2016 for the first year in four.
Exchange-traded trust funds backed by bullion – which give investors exposure to gold prices without any ownership of metal – also expanded worldwide last year for the first time since 2012.
Excluding gold ETFs however, global gold demand from visible sources fell to the lowest since at least 2009 on the World Gold Council's new data, retreating 13% from 2015 as world prices rose, and dropping by almost one-fifth from the previous 5-year average. 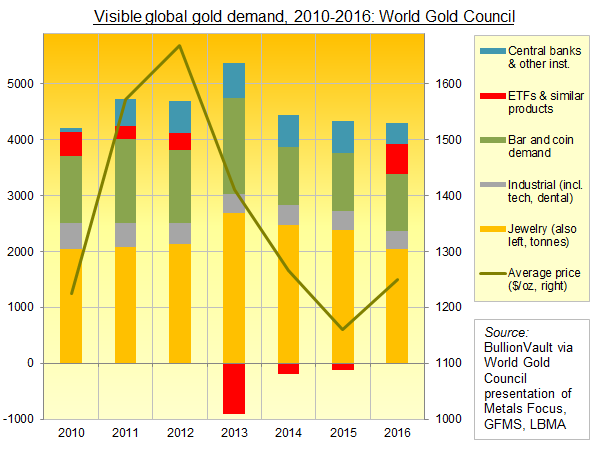 The largest gold ETF – the SPDR Gold Trust (NYSEArca:GLD) – expanding for a second-day running on Thursday, the first such back-to-back growth in investor demand for the stock since mid-October.
Adding 12 tonnes this week however, the GLD has so far reversed only 1/12th of its 155-tonne outflow as shareholders liquidated stock since Donald Trump won the US presidential election in November.
"2016 was the second best year for ETFs on record," says the World Gold Council's report today, the highest since the global economic depression of 2009 saw central banks jump to zero interest rates and quantitative easing.
Gold investment demand for small bars and coins "sprang into life in Q4 having been subdued for most of the year," the report goes on, calling the late 2016 price-drop "the buying opportunity many retail investors had been waiting for."
Jewelry demand meantime sank to a 7-year low on the World Gold Council's data – compiled by specialist analysts Metal Focus – down some 14% worldwide thanks to "regulatory and fiscal hurdles in India and China's softening economy."
Competitor analysts Thomson Reuters GFMS last week put the 2016 drop in jewelry demand nearer one-fifth, pulling it down to the lowest since 1988.