END_OF_DOCUMENT_TOKEN_TO_BE_REPLACED

GOLD BARS traded in London's wholesale market rose to 15-week highs above $1300 per ounce against a falling US Dollar as 2018 got underway on Tuesday, rising almost 1% from before New Year.
Global stock markets also gained as the Dollar extended last year's 9.8% drop against the world's other leadng currencies – its worst annual fall since 2003 according to Reuters.
The price of wholesale gold bars rose 11.9% versus the Dollar in 2017, finishing with the precious metal's  highest year-end close since the record peak of 2012 thanks its best year-on-year performance since 2010.
Anti-government protests meantime continued across Iran, where the theocratic regime says 22 people have now died since marches and rallies blaming it for high inflation and falling real incomes began a week ago.
To mark New Year 2018, the regime in North Korea unveiled a giant ice sculpture of its Hwasong-15 intercontinental ballistic missile, part of the nuclear arsenal leader Kim Jong-un claims can now reach any part of the continental United States.
"The US Dollar [is] soggy...[today's] economic data is strong, risk is 'on', investors are looking for yield, and the year won't start until after Friday's December US employment report," says FX analyst Kit Juckes at French investment and bullion market-making bank Societe Generale.
Priced in the Dollar, large gold bullion bars meeting the London Good Delivery standards rose above $1313 per ounce on Tuesday, some 6.1% above mid-December's 5-month low.
Silver rose less steeply from before New Year, having already touched Tuesday's top at $17.10 on Friday for a 9.4% gain from early December's drop back to July levels.
Platinum prices also rose, hitting a 1-month high against the Dollar at $938 to trade 7.4% above mid-December's near 2-year low.
Versus China's Yuan, the Dollar meantime fell below ¥6.50 on the forex market, its weakest level against the Chinese currency since August's 14-month low.
That saw Shanghai gold premiums, over and above comparable London quotes, begin 2018 some $1.25 below the typical incentive for new imports to the world's No.1 consumer nation of $9 per ounce.
"Interest has been fairly muted in Asia over the past few weeks as the premium stayed fairly range bound around $8-$10," says Tuesday's note from Swiss refiners MKS Pamp's Asian team, "although seasonal buying in January ahead of Chinese New Year should provide support in our time zone.
"There is very real potential for physical interest to drive the [gold] price even higher throughout January. From here, dips below $1290 should be well supported, while next major resistance stands around $1325-$1330."
"[After gold prices] exceeded the technically important 200-day moving average and, a short time later, the 100-day moving average," says a note from the commodities team at Germany's Commerzbank, "this allowed it to rise above the psychologically important $1300 per troy ounce mark again.
"Speculative financial investors also played a part in the latest price surge," Commerzbank adds, pointing to positioning data from US regulator the CFTC showing how non-industry traders in Comex gold derivatives grew their net bullish betting "by over 40% since mid-December."
Net of their bearish bets, hedge funds and other 'Managed Money' traders under the CFTC categorization grew their bullish positions by 26% in the week-ending Tuesday 26 December.
Reaching the notional equivalent of 341 tonnes, that was still one-third smaller than the last 10 years' average.
Silver betting in contrast remained negative as of Boxing Day for a third week running, equal to -1,105 tonnes against a 10-year average of +3,992 tonnes. 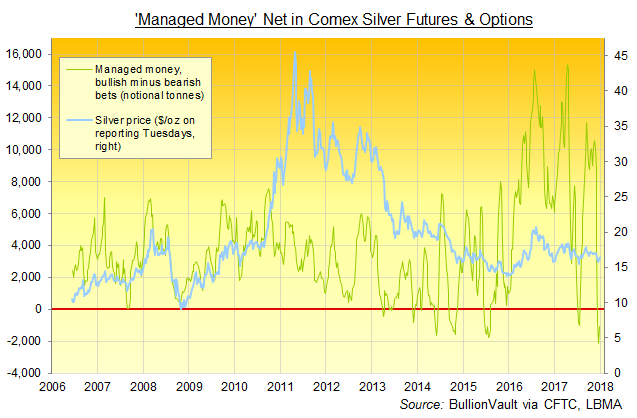 Across 2017 as a whole, the giant iShares Silver Trust (NYSEArca:SLV) – the largest silver-backed exchange-traded vehicle – shrank some 6% as shareholders liquidated the stock, needing 9,972 tonnes of bullion to match the value of its shares outstanding.
The giant SPDR Gold Trust (NYSEArca:GLD) meantime added 15.3 tonnes of bullion in 2017 to back the value of its shares as investor for the vehicle grew 1.9%.
Taking the exchange-traded trust fund's total backing to 837 tonnes, that was barely one-twelfth of the inflow in 2016, when the Brexit referendum and US election saw strong investor demand for gold bars, coins and exchange-traded proxies.
On a daily basis, the 1-month correlation between net investor demand for the GLD's shares and the Dollar gold price also weakening, averaging 0.11 in 2017 against 0.38 in 2016 and 0.21 in 2015.