END_OF_DOCUMENT_TOKEN_TO_BE_REPLACED

GOLD PRICES set fresh Euro and Indian Rupee records on Friday, rising above $1640 per ounce for the first time since February 2013 in US Dollar terms to gain almost $60 for the week as stock markets fell, together with long-term interest rates but also the 'safe haven' Japanese Yen, as the number of coronavirus cases continued to spread across East Asia.
Nearly 120 people died of Covid-19 in China on Thursday, the Beijing authorities said this morning, claiming that the disease is "gradually coming under control" in source-province Hubei but changing the methodology for counting new infections for the 3rd time in 8 days.
Nearby South Korea became the second-worst infected country after confirming a surge to more than 200 cases, most linked to a Christian sect in the Asian nation's 4th largest city Daegu, where residents have been advised to stay indoors.
Already reporting a 6.3% annualized plunge in GDP for end-2019, world No.3 economy Japan meantime showed a worse-than-expected drop in manufacturing activity on the Jibun Bank PMI survey, and also confirmed more cases of Covid-19 outside of the Diamond Princess cruise ship quarantined in Yokohama, itself the scene of 'chaotic' mismanagement of passengers according to one infectious disease specialist.
Tokyo's Nikkei index slipped, closing 2.9% below last month's peak near 28-year highs.
The Yen also fell on the FX market, briefly falling to fresh 9-month lows of ¥112 per Dollar after plunging over 2.0% since Wednesday – its sharpest 2-day drop since September 2017.
"Traditionally one of the safe haven currencies," says Rhona O'Connell, head of market analysis for Europe, Middle East and Asia regions at global commodities, equity and FX providers INTL FCStone, "the Yen has lost that role at least temporarily as the economy falters and concerns grow over  the arrival of COVID-19 on the mainland.
"Gold in local terms has soared, gaining 5% in the past three days. Local retailers are reporting queues of customers looking to  sell back."
Gold today broke above ¥5,900 per gram, its very highest price since the all-time top of 21 January 1980.
Back then, the Yen was worth only half as much in US Dollar terms as it is today. 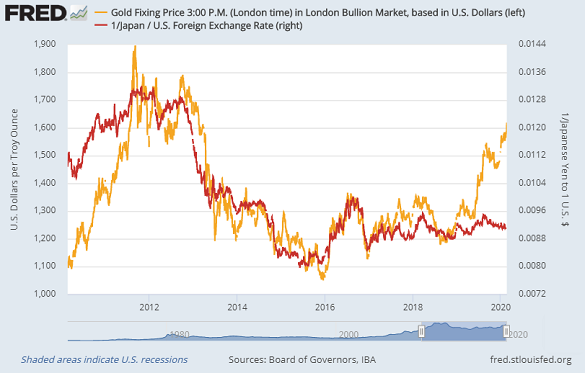 "In all my years in the market, I can't remember a time when gold rose like this at the same as the Yen fell," says a note from ICBC Standard Bank's former Tokyo manager Bruce Ikemizu, now chief director of the newly established Japan Bullion Market Association.
"Personally, I have long felt uncomfortable calling the Japanese Yen a 'safe haven' asset. I believe it is overvalued, and will lose value in the long term.
"For Japanese savers, owning gold will be the most effective way to deal with the anxiety and problems that creates."
Growing investment demand yesterday saw ETF trust funds backed by gold worldwide expand for the 22nd trading day in succession according to data from Bloomberg.
Trading volumes in Comex gold futures and options meantime rose by almost a quarter from Wednesday's total, reaching a new high for the month.
A US judge meantime sentenced Donald Trump associate Roger Stone to 40 months in prison, expressing "disgust" at his lying under oath and obstructing the Justice Department's investigation of alleged but unproven Russian collusion in Trump's 2016 election campaign.
Friday saw a UK court convict a would-be Islamic State suicide bomber for plotting to attack St.Paul's Cathedral in the City of London.
That jailing comes after the stabbing – apparently not terror-related – of a worshipper at a London mosque Thursday, and the "definitely xenophobic" murder of 9 people at Turkish hookah bars in Hanau, Germany by a lone gunman who then killed himself and his mother on Wednesday.
Wednesday night saw 9 police officers injured in the central Ukrainian town of Novi Sanzhary when protesters attacked a convoy carrying Covid-19 evacuees home from China.
Gold priced in the Euro today touched €1520 per ounce, yet another new all-time high, despite business-activity data on the Markit PMI survey showing the slowest contraction in manufacturing in 12 months.
The first-flash ISM figure for US manufacturing, however, today showed activity slowing near no-growth so far in February.