END_OF_DOCUMENT_TOKEN_TO_BE_REPLACED

GOLD PRICES fell on Thursday as global stock markets rose sharply after US President Trump's new economic advisor denied that the world's No.1 economy has started a "trade war" with the No.2, China, but tensions over a military war between Nato members Turkey and Greece worsened.
"There's no trade war here," former CNBC anchor Larry Kudlow told Fox overnight, calling Trump's list of Chinese goods facing tariffs – already met by a Chinese list of US imports – "just the first proposals.
"I doubt there will be any concrete action for several months."
Gold priced in Dollars fell back to unchanged for the week so far at $1326 per ounce, and major government bond prices also retreated as equities rose, pushing 10-year US Treasury yields to 1-week highs above 2.81%.
New data today showed the United States recording its heaviest deficit in net exports of goods since mid-2008 last month.

China's stock market slipped again, but Tokyo added over 1.5% before European equities gained more than 2% on average, erasing the last month's previous drop to 1-year lows on the Eurostoxx 50.
Turkey's Borsa Istanbul 100 also rose, adding 0.4% to trade some 6% below January's fresh all-time high as its Lira currency sank to new all-time lows on the FX maket amid worsening military tensions with Greece.
Wednesday saw Turkish warplanes violate Greek airspace 31 times over the Aegean Sea, Athens said last night – the actions of an "enemy that continues to provoke us" according to Greek defense minister Panos Kammenos, ordering the deployment of 7,000 additional troops to disputed islands and the border in Thrace.
"If they have the guts let them dare to challenge one inch of our territory... the Greeks, united, will crush them," Kammenos told reservists on the eastern island of Ikaria yesterday.
Turkey's consulate in Athens last night had its windows smashed, reportedly by 15-20 members of a self-declared anarchist group.
"We think it likely that portfolio diversification and rising geopolitical uncertainty were the chief drivers" for the Central Bank of the Republic of Turkey's additional gold buying in 2017, says consultancy Metals Focus in its new Gold Focus 2018, launched Wednesday.
Turkey also came in the top 5 countries for each of gold jewelry production, net investment demand, and scrap gold recycling in 2017 on Metals Focus' analysis.
Second only in 2017 to Russia's central-bank gold buying, "The majority of [Turkey's added] gold reserves was believed to have been bought in the international market," Metals Focus says, contrasting this with Moscow's purchases from Russian mining's "sizeable structural surplus" over domestic private-sector demand.
Following a successful push starting in 2012 for private savers in Turkey to hold gold with commercial banks – which could then be recorded with the central bank as part of the lenders' financial reserves – Ankara last April announced a less successful plan to attract privately-owned gold into the formal financial system. 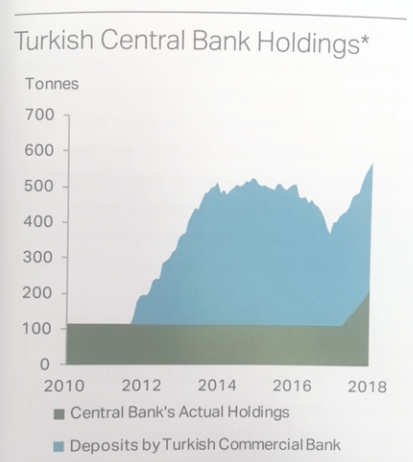 US prosecutors yesterday asked a court in Manhattan to sentence Turkish banker Mehmet Hakan Atilla – convicted in January for breaking Western sanctions against Iran in a trial which Turkey's leader Recep Tayyip Erdogan called a "political coup attempt" against his government by the FBI and CIA – to 20 years in prison, with an absolute minimum of 15.
Involving illegal gold and cash transfers, Atilla's scheme – which some witnesses linked to senior Turkish politicians, including Erdogan himself – enabled Tehran to sell oil for foreign currency despite the Obama White House's 2012 sanctions over its nuclear weapons program.
Back in the bullion market, silver fell Thursday in lockstep with gold prices on Thursday, touching the cheapest Dollar price in more than 2 weeks at $16.20 per ounce and holding the Gold/Silver Ratio of the two metals' relative prices just shy of 2-year highs at 81.5.
Platinum prices fell harder yet again, touching the lowest level in Euro terms since February 2009 at €740 per ounce – a price first reached on the way up in December 2003.
"Gold has a much higher probability of moving north as opposed to south," Bloomberg today quotes Stephen Letwin, CEO of top 25 mining producer Iamgold (TSE:IMG).
"I've been around a long time. When you're in an industry that's not replacing what it produces, eventually, the price has to move up."