END_OF_DOCUMENT_TOKEN_TO_BE_REPLACED

GOLD PRICES outpaced a drop in world stock markets on Tuesday in London, dropping $10 per ounce from the US Labor Day weekend as the Dollar resumed its climb versus other currencies but reaching its highest value against silver since March 1995 as the gray metal sank on the bullion market.
Emerging-market currencies fell hard again as data showing GDP growth in Brazil stalled in the second quarter was followed by news that South Africa has slipped into recession.
Struck by the exodus of 2.3 million citizens to escape hyperinflation now running at 1 million per cent per year, Venezuela's socialist government today ordered commercial lenders to keep 100% of their required reserves on deposit at the central bank, killing all new lending as President Nicolás Maduro offers "gold-backed" certificates to savers.
No.10 silver-mining nation Argentina also "took steps" to defend its Peso currency, the New York Times reports, slashing the number of government ministries and imposing a new tax on exports, with President Mauricio Macri saying "This is not just another crisis. It has to be the last."
Silver prices today hit 21-month lows at $14.16 per ounce, driving the Gold/Silver Ratio of the two precious metals' prices up past the 2008 crisis peak to reach 84.5
The ratio has averaged 55.5 ounces of silver per 1 ounce of gold over the last half-century. 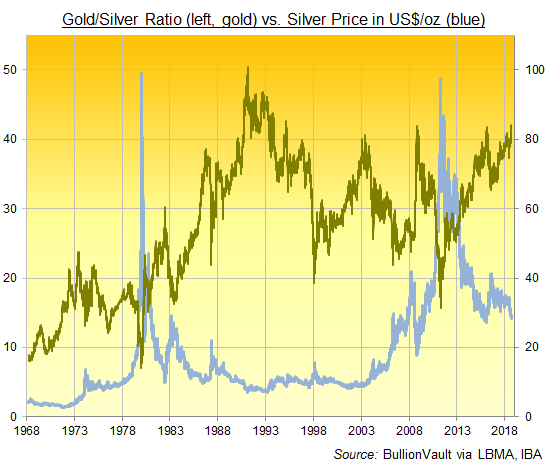 "The emerging market economic crisis is making currencies very weak and benefiting the Dollar," Reuters quotes Hong Kong dealer Peter Fung at Wing Fung Precious Metals, "which continues to pressure gold.
"Gold should track the Dollar's movement very closely and interest rate expectations too are weighing on the metal."
Trading at $1193 as New York dealing began today, gold priced in Dollars has now fallen in 9 of the last 12 weeks – the same number as the US currency's broad trade-weighted index has risen on the forex market.
Priced in other major currencies gold was little changed Tuesday from Monday's quiet session, slipping to €1032 for Eurozone investors and holding above £930 for UK investors as the Pound lost value yet again.
UK construction activity fell hard in August from July's 14-month high, the new PMI survey from data providers IHS Markit said today.
Presenting the latest Bank of England Inflation Report to Parliament later on Tuesday, current chief Mark Carney was set to be quizzed by lawmakers over rumors he has been asked to stay in the role beyond 2019's Brexit from the European Union.
Gold priced in Australian Dollars held little changed Tuesday from Monday after the Reserve Bank of Australia kept its key interest rate unchanged at a record low of 1.5% for the 25th month in a row, saying this should "support the Australian economy."
Now the No.2 gold-mining nation behind China, Australia's output over the last 12 months has hit a 20-year high according to consultancy Surbiton Associates, totalling 310 tonnes.
Formerly the world's No.1 gold mining nation, South Africa has seen output slide to position No.6 over the last 20 years.
Last month the National Union of Mineworkers (NUM) declared a dispute over wages with the country's top 4 gold-mining companies.
The Mexican Peso – currency of the top silver mining nation – fell hard on Tuesday, helping support metal prices for local producers.