END_OF_DOCUMENT_TOKEN_TO_BE_REPLACED

GOLD and SILVER prices rose against a falling US Dollar after the Bank of Japan announced smaller-than-expected policy stimulus Friday and more analysts revised their forecasts sharply higher following this year's 26% and 45% gains to date.
Gold slipped versus the Euro and Yen however, erasing the last of this month's earlier gains to match Dollar and Sterling prices with no change for July – only the third month to miss a substantial rise in 2016 so far.
Major government bond yields eased lower as world stock markets flatlined.
More than $10 trillion of bonds issued by developed-world governments and corporations now offer new buyers an annual yield below zero, according to Reuters.
"The relationship between the opportunity cost of holding gold and interest rates has become ever more apparent," says Bernard Dahdah, precious metals analyst at French investment and bullion bank Natixis, revising his 2016 full-year forecast 31% higher from $970 to $1275 per ounce.
Winner of the London Bullion Market Association's 2015 gold forecast survey, and previously forecasting a drop below $1000 by April this year, Dahdah now says "the [2016] Fed rate hike won't happen until at least December."
The UK's Brexit referendum result, Dahdah adds, makes "the future of the European project and the economic stability of the region...of great concern." 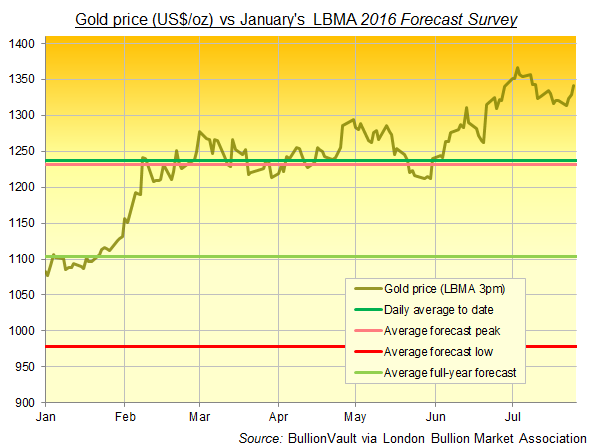 "The likelihood of a US recession in the next three years is becoming very high," writes Rene Hochreiter, mining analyst at Sieberana Research in Johannesburg and winner of last year's LBMA silver price forecast.
Hochreiter was in January more bearish on gold's 2016 low-point than Dahdah, predicting a drop to $850 per ounce sometime this year.
The metal bottomed to date at $1077 on 5th January, the second trading day of 2016 – almost $100 above the average low-end forecast of the 31 analysts then submitting entries to  the LBMA's 2016 Forecast Survey.
"If Britain can exit the EU," Hochreiter now says, "then Trump could very well become [US] President...certain to cause a massive rise in US debt...and a fall in US share prices."
The resulting "weaker Dollar will, without doubt, mean a stronger silver (and gold) price," he adds, raising his full-year daily average silver forecast 27% from $13.40 per ounce to $17.10.
Touching $20.47 earlier this month, silver has now risen above the most bullish top-price forecast from January's LBMA survey ($19.50 from Philip Newman at consultancy Metals Focus) and averaged more so far in 2016 at $16.39 than all but one full-year forecast ( $17.50 from Joni Teves at Swiss bank UBS).
Gold's year-to-date average of $1237.35 meantime comes above all 31 forecasters' full-year predictions from January.
London's peak 2016 gold benchmark of $1366.25 on Wednesday 6 July means it has beaten all but one top-range forecast ($1375 from Martin Murenbeeld at Dundee Economics).
Failing to cut deposit rates for Japanese banks deeper below zero today, the Bank of Japan did say it's doubling quantitative easing money-creation to buy exchange-traded trust funds holding Japanese assets, raising its spend on ETFs to the equivalent of $58 billion per year, and also increase its lending of US Dollars.
The US Federal Reserve this week held its key interest rate unchanged from December's solitary hike to 0.50%.
"After years of declines, silver prices made significant gains in the first half," says a note from bullion market-making bank HSBC, raising its 2016 average price forecast from $15.90 to $18.00 per ounce.
"Our expectation of gold strength is supportive [for silver], as are an accommodative Fed policy, negative interest rates, and geopolitical risks."