END_OF_DOCUMENT_TOKEN_TO_BE_REPLACED

GOLD PRICES edged lower against a rising US Dollar in London trading on Tuesday morning, erasing one-third of Easter Monday's near-$20 gain as European stock markets caught up with Wall Street's latest fall, dropping 0.5% by lunchtime.
With analysts blaming US President Trump's trade war with China and latest Twitter attacks on e-tailing giant Amazon for the drop in world stock markets, major government bond prices held steady, keeping the yield offered by benchmark 10-year US Treasury debt near its lowest level since end-January at 2.74%.
Prices for industrial, energy and agricultural commodities steadied after Monday's drop, but silver also retreated with gold prices, holding in the middle of its last 2 months' trading range at $16.55 per ounce.
Platinum prices fell harder, dropping back near last week's new 2018 lows at $929 per ounce.
After new data Monday showed manufacturing growth slowing in China, new surveys today said Germany slowed again in March from December's all-time peak on the Markit PMI index, while the UK gave its weakest quarterly reading in a year.
Yesterday's ISM manufacturing index in the US missed analyst forecasts, and "critically, orders sagged to a 7-month low and production touched a 5-month low," notes economist David Rosenberg at Canadian wealth management firms Gluskin Sheff.
But input costs on the ISM's Prices Index leapt, with no US industrial sector reporting a decrease in prices compared to February as March gave the most inflationary reading since April 2011 set the 5th highest figure since the end of the 1970s.
That month saw silver prices come within 50 cents of 1980's all-time peak at $50 per ounce, with bulllish betting on Comex futures and options by hedge funds and other money managers setting what was then a new record net of that group's bearish bets at a notional $6.7 billion.
Last week in contrast saw the Managed Money hold a net bearish position on Comex silver contracts for the 7th week running, the longest net negative stretch since late 2014 with a notional value of -$2.8bn. 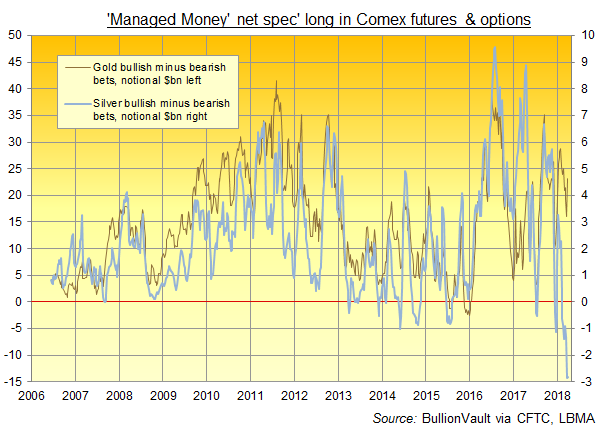 In stark contrast to silver, Comex gold last week saw Managed Money speculators slash their bearish bets by one third and grow their bullish bets by more than a quarter.
Together that grew the Managed Money's net speculative long position by 41.9%, the largest weekly jump since August.
"[The silver] positioning is not extreme," says a note from China-owned commodity house and London bullion clearing bank ICBC Standard.
"To classify in that bracket would arguably require money managers to hold an unprecedentedly large short. But [it] clearly creates the scope for a [short term] positioning driven correction...[especially] when considered against money managers' positioning in gold."
The Gold / Silver Ratio of the two precious metals' prices continued to hold above 80 on Tuesday, putting gold near its most expensive versus silver since the early 1990s.
"In the very short-term," says ICBC Standard's note, "we think there is a case for a reversal...but over time we see few reasons to believe that the ratio is subject to any kind of cap."
Dipping below $1337 per ounce by lunchtime in London, gold priced in the US Dollar stood 2% below late January's 18-month peak.
The broad US stock market has since lost 10% from then, when the S&P 500 index set a new all-time record high.
From the peak of the Nasdaq 100 on 12 March in contrast – since when the tech-stock index has also now lost 10% – gold today traded 1.3% higher.