END_OF_DOCUMENT_TOKEN_TO_BE_REPLACED

The GOLD PRICE is up above $1305 per ounce this Monday lunch time amid Asian stock market gains to multi-decade highs following Friday’s record US stock levels.

The MSCI Asia Pacific Index rose to its highest level since November 2007, while Nikkei climbed for a tenth day to the highest level seen since Nov 1996. The FTSE increased 0.06% and DAX gained 0.16%.  Spain’s IBEX Index fell 0.67%.

Meanwhile, tension over North Korea continues to simmer. Today, South Korea and the United States begin week-long joint Navy drills in the waters around the Korean peninsula amid signs North Korea is preparing for another provocative move such as a missile launch. North Korea’s state-run media agency KCNA on Saturday criticized the exercise, calling it a “reckless act of war maniacs.”

In the Middle East, concerns regarding U.S. sanctions against Iran as well as the ongoing conflict in Iraq are seen to be pushing up oil prices.  WTI crude climbed toward $52 a barrel.

“(Gold) Prices have established themselves above $1,300, although the upside may be a little limited, we would expect to see it remain at $1,300-1,310 mark over the course of the week,” said ANZ analyst Daniel Hynes.

“The market’s still surely pricing in a rate hike this year by the U.S. Federal Reserve.”

Over the weekend “The biggest surprise in the U.S. economy this year has been inflation,” Federal Reserve Chair Janet Yellen said at the Group of Thirty’s Annual International Banking Seminar in Washington, while she confirmed the U.S. central bank expects to continue raising interest rates gradually as solid growth, a strong labour market and a healthy global economy lifts prices.

The US core consumer price index rose 1.7% in September up from the prior year, missing estimates for a 1.8% rise according to the data released last Friday.

In contrast to Yellen, at the same meeting Bank of Japan Gov. Haruhiko Kuroda said “The Bank of Japan will consistently pursue aggressive monetary easing with a view to achieving the price stability target at the earliest possible time.”

Last month, Prime Minister Shinzo Abe of Japan dissolved Parliament and called a snap election for Oct. 22.  Voters will have the chance to weigh in on Abe’s stimulus plan to revitalize Japan’s economy — known as “Abenomics.”

USD index, the value of USD relative to a basket of foreign currencies, gained 0.1% as the yield on 10-year Treasuries raised two basis points to 2.29 %.

The latest data says that net bullish betting by money managers on Comex gold derivatives reduced 2.82% to 561 tonnes last Tuesday, although the speculative net long position gained.  This is the 4th weekly loss and the lowest level in 8 weeks. 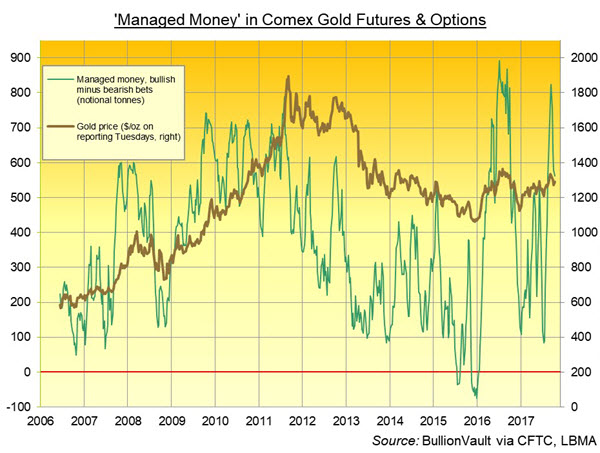 However hedge funds and other money managers trading Comex silver futures and options contracts kept the net long position almost flat from the previous week.  It is still at a six week low.

Back in Europe, yesterday’s election in Austria that saw the conservative People's Party led by 31-year-old Sebastian Kurz look likely to take the country's general election but nationalist Freedom Party (FPÖ) led by Heinz-Christian Strache looked set to emerge as kingmaker in coalition talks after Mr Kurz failed to win an outright majority.