END_OF_DOCUMENT_TOKEN_TO_BE_REPLACED

GOLD PRICES dropped to their lowest Dollar level in almost 3 weeks on Thursday, as the US currency rose but everything else fell after yesterday's minutes from April's Federal Reserve meeting said a June rate-hike looks "likely appropriate".
World stock markets today followed New York's sharp drop lower on the news, with betting on US interest-rate futures jumping to put the odds of a June hike above 1-in-3.
That's up from below 1-in-20 at the end of last week.
Gold priced in other currencies fell less quickly, but silver sank below $16.40 per ounce, down more than a dollar from Monday's high, while gold traded 3.5% lower against the US currency from that peak. 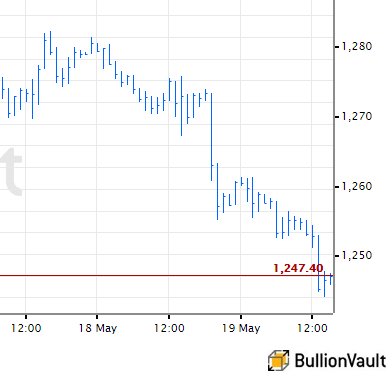 The Euro currency Thursday fell to its lowest level since 29 March against the Dollar at $1.11, while commodity prices dropped over 1.6% by mid-afternoon in London.
US government bond prices fell far enough to drive 10-year yields up to 1.87%, erasing all of May's previous drop to 1.71%, as all other major-developed and emerging-market debt prices dropped.
Brazil's 10-year bond yields jumped 0.25 percentage points to their highest level in 4 weeks at 12.85%.
"Gold [is] the most responsive commodity to changes in Fed interest-rate hike probabilities," found a new research paper last week from French investment and bullion bank Societe Generale.
"Obviously the possibility of a rate rise in June is very much beholden to US economic figures,"says David Govett at London brokers Marex Spectron.
But "gold [on Thursday] broke a one month uptrend line at around $1270, and almost immediately dropped to a low of $1255" before dropping further to $1244 per ounce.
That level marked a 12-month high for Dollar gold prices when first seen on the way up in early February 2016.
Shanghai's new daily benchmark gold price had already dropped 1.4% from Wednesday, hitting its lowest 'fix' since 28 April even as the Yuan fell versus the Dollar.
"Most participants," said the Fed's minutes of April's US policy meeting, "judged that if incoming data were consistent with economic growth picking up...labor market conditions continuing to strengthen, and inflation making progress toward the 2% objective, then it likely would be appropriate...to increase the target range for the federal funds rate in June."
One member of the FOMC's 10-person committe voted against the consensus, with the Kansas City bank's president Esther George calling for the second meeting in succession to raise rates by 25 basis points.
The same lone dissent from the consensus was previously made in September and then October 2015 by Richmond Fed president Jeffrey Lacker, now a non-voting member until 2018.
US investors are holding the most cash as a proportion of portfolios in almost 15 years, according to a survey from the BAML financial services group.
Having been a voice of just one, Lacker's double dissension was followed in December by a unanimous vote to make the first hike to US rates in over a decade.
India's largest refiner, MMTC Pamp, meantime said demand for gold bullion is so poor in the world's second-largest consumer nation that it is suspending production
"It is absolutely reflecting the current climate," London-based news providers Fast Markets quote an Indian analyst, "which is not at all conducive for smelting at this moment...It's in bad shape."