END_OF_DOCUMENT_TOKEN_TO_BE_REPLACED

GOLD PRICES fractured worldwide on Tuesday, with dealing spreads widening sharply while the US derivatives market spiked $100 per ounce above the global physical market's reference point of London settlement after UK Prime Minister Boris Johnson put the country into official coronavirus lockdown.
Latest data say the UK capital came into this crisis holding near-record quantities of bullion, with more than 8,200 tonnes of gold – one-third of it in commercial storage outside the Bank of England – and 36,000 tonnes of silver.
Those private stockpiles equate to 10 months of global gold-mine production and 1.3 times annual silver output. 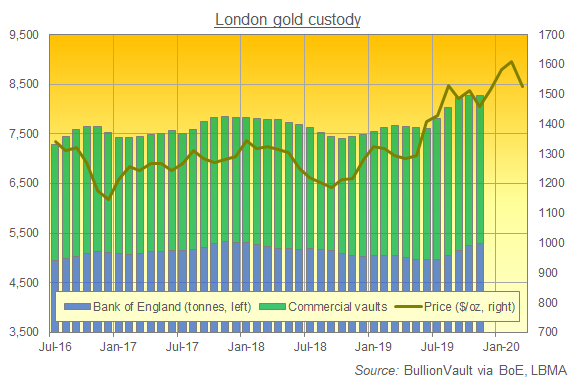 "It's vital to slow the spread of the disease," the former newspaper columnist and mayor of London told the nation in a TV broadcast, announcing police powers to disperse groups of more than 2 people found outdoors after a sunny led to packed beaches and tourist hot-spots.
"New rules in force now," said the UK Government this morning in text messages sent to people identified as 'at risk'.
"Stay at home. Protect the NHS. Save lives."
Following Monday's news that 3 Swiss gold bullion refineries near the Italian border are now shut because of the virus threat, trade body the London Bullion Market Association assured journalists overnight that London's major bullion banks say this "will not materially impact the liquidity and efficiency of the London-based physical, wholesale market trade in gold and other precious metals in the foreseeable future."
But dealer spreads between buy and sell gold prices blew out Tuesday morning in London, jumping from the standard 50 cents to reach $20 and even $50 per ounce for unallocated gold credit accounts, with the additional cost of allocation – meaning a specific set of bars held exclusively for the buyer – doubling from normal levels among LBMA members.
With both prices to buy and sell gold in London – heart of the world's physical market – jumping $100 per ounce from 24 hours earlier, the April contract in US gold futures meantime leapt almost $100 higher still, coming with $2 per ounce of $1700 while loco-London physical prices reached $1600.
"That is a huge difference, this is unheard of," says bullion bank Standard Bank's former Tokyo branch manager Bruce Ikemizu, now head of the Japanese Bullion Market Association.
"Incredible things are happening in the gold market."
Comex gold contracts – invariably settled for cash, rather than bullion – retreated to $1641 for April settlement as loco-London rose to $1600 before edging back $10 per ounce.
Comex silver contracts in contrast stayed closely in line with loco-London spot quotes, adding almost $1.50 from last weekend's level to hit $14.20 per ounce before edging 20 cents lower.
Shanghai gold prices had earlier jumped back above loco-London quotes, taking the premium for metal landed in China – gold's No.1 consumer market – to nearly $7 per ounce after 3 weeks of discounts on weak local demand amid the coronavirus' source nation's shutdown.
Source city Wuhan in Hubei province will lift its lockdown later this week, the politburo said.
As Australia today closed all cinemas, China re-opened 500 and also opened sections of the Great Wall to tourists.
World stock markets meantime leapt, with New York's S&P500 index gaining 6.7% in early trade, on what news-wires called fresh hopes for a dramatic US stimulus package from Washington.