END_OF_DOCUMENT_TOKEN_TO_BE_REPLACED

GOLD PRICES struggled $5 below last week's closing level in London's bullion market on Wednesday, trading at $1565 per ounce as world stock markets rose yet again, nearing last month's fresh all-time highs on the MSCI World Index even as infections and the death-count from Covid-19 continued to grow.
US Federal Reserve chairman Jerome Powell yesterday named coronavirus' spread from China as a risk to global economic growth in his regular testimony to lawmakers in Washington.
Betting that the Federal Reserve might raise its key interest rate at its next meeting in March has evaporated since this time last month, data say from the CME derivatives exchange, with 1-in-12 bets now forecasting a rate cut instead.
But longer-term bond yields rose on Wednesday as debt prices slipped, a sell-off in 'safe haven' bonds led according to some analysts by China today reporting the fewest new cases of 2019-nCoV since late January.
"It would be important for fiscal policy to support the economy if it weakens," said Fed chair Powell to the House Financial Services Committee on Tuesday, pointing out that US interest rates are already very low, leaving little room for stimulus.
"When interest rates are low, fiscal policy can be highly effective," world No.2 central-bank chief Christine Lagarde of the European Central Bank also said yesterday.
"[Extra government spending] can support Euro-area growth momentum...[but] the longer our accommodative measures remain in place, the greater the risk that side effects will become more pronounced."
Despite the positive background for gold prices however, "Retail gold investment across much of Europe and North America faces challenges this year," says the latest weekly note from specialist analysts Metals Focus, "with Germany being the only notable exception."
Excluding the Eurozone's No.1 economy, "European purchases saw a major drop in 2019, with double-digit losses being the norm for most countries," the consultancy explains, while US gold coin and bar demand also suffered a third year of "considerable losses" and has so far "remained subdued" in 2020.
"While continued economic uncertainties clearly favoured hard assets, the low awareness of gold as an investible asset among the general public (outside German speaking areas) remained a key headwind." 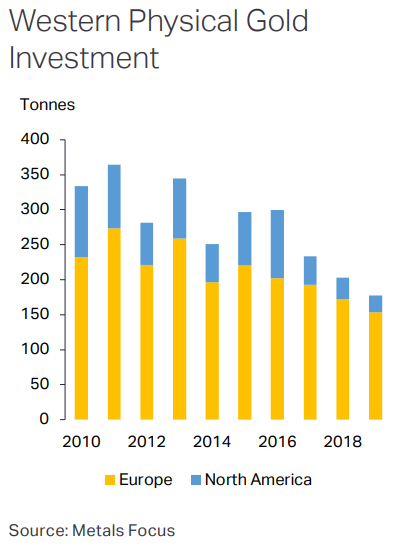 Also in Germany, "Many of the narratives about monetary policy cannot withstand careful analysis," said ECB executive board member Isabel Schnabel on Tuesday, warning of " aggression and a coarsening of the language" by the German media towards ECB policymakers.
"This is something that worries me," she told lawyers attending a conference in Karlsruhe, where judges will soon hear further arguments against whether or not the ECB's purchases of Eurozone government bonds – also known as quantitative easing – are legal.
With most Western markets seeing weaker household gold investment demand in 2019, China this wek reported strong gold import numbers for December.
But that was merely "a flash in the pan", according to UK-based consultancy Capital Economics, showing only "a seasonal pick-up in jewellery demand in the run-up to Chinese New Year.
"Looking ahead, we expect high local-currency prices in India, coupled with a slowdown in Chinese economic growth to curb physical demand for gold in 2020...weighing on the price of gold this year."
Household gold demand across all segments – jewelry, bar, coin and technological use – sank in 2019 to the weakest since the global recession of 2009.
Total supply to the gold market meantime set a fresh all-time high. But bullion prices in all currencies rose sharply, gaining 18.8% across the year in US Dollars, gold's strongest performance since 2010.