END_OF_DOCUMENT_TOKEN_TO_BE_REPLACED

GOLD PRICES popped $5 per ounce higher to recover last week's finish at $1177 at the start of New York trade on Wednesday, rallying as world stock markets also rose with government bond prices.
Betting in the futures market now puts 95% certainty on the US Federal Reserve raising its key interest rate for the first time since last December's "lift-off" from 7 years at zero.
Today's rise in bond prices saw 10-year US Treasury bond yields retreat to 2.37%, the lowest rate in a week, as crude oil fell again but base metals rose.
For the year to date, gold priced in US Dollars neared Wednesday afternoon's London benchmark auction 11% higher from the start of 2016, but some 15% below early July's peak of $1375 following the UK's Brexit referendum decision.
Silver also popped higher early afternoon in London, rising 2.5% from the day's earlier Asian quotes to break above $17 per ounce for the first time in 3 weeks.
"Momentum is steady but weak," says bullion market maker Scotiabank's daily technical analysis of gold and silver prices.
"Still bearish...risk remains to the downside."
"All in all," writes broker Marex Spectron's David Govett in London, "the feeling is one of complete indifference" amongst professional traders such as money managers and hedge funds.
"I cannot bring myself to recommend selling this on the lows [but] I intend to remain side-lined for the time being ahead of [next week's US Fed] FOMC meeting."
With private investor demand to buy gold jumping to a 5-year high in November on BullionVault, retailers in the United States have raised their re-stocking from coin manufacturer the US Mint to the highest level since 2011 so far in 2016 according to CoinNews.net.
Russia's central bank – the second heaviest official buyer of the 21st century to date – added another 40 tonnes to its reserves as prices fell 3.8% in October, meaning that in the last 2 years Moscow has grown its bullion reserves by almost one half to 1,542 tonnes, according to Austria's  Die Presse online.
That's equivalent to 6 full years of Russia's domestic gold mining output – the 3rd largest after China and Australia's – currently struggling to reach international markets amid US and European sanctions over the Crimea crisis against its commercial banking sector. 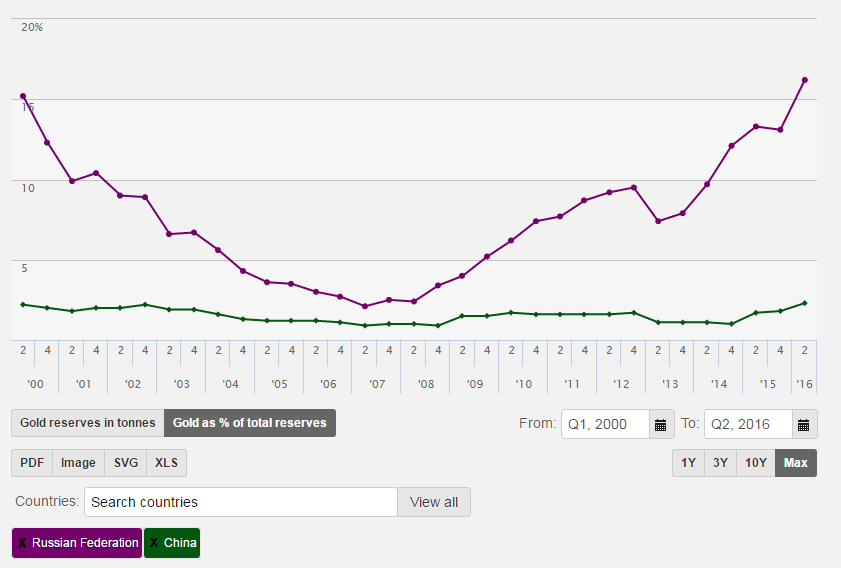 No.1 gold buyer the People's Bank of China added no bullion last month, new data showed Wednesday, contrary to internet claims that it has also "jump[ed] at golden opportunity" of lower US Dollar prices.
Shanghai's benchmark gold price today held firm from Tuesday, but a dip in the Yuan vs. the Dollar on the FX market meant the Chinese gold premium – the incentive offered to importers over and above comparable quotes in London, heart of the world's wholesale market – retreated $1 from yesterday's new 3-year high above $26 per ounce.
Tuesday afternoon's $10 rally in the global LBMA Gold Price benchmark for metal settled in London saw shareholdings in the giant SPDR Gold Trust (NYSEArca:GLD) – the world's largest gold-backed exchange-traded fund – stay unchanged at a 7-month low of 869 tonnes.
That's still larger by more than one-third from the 7-year low in GLD holdings hit as investors liquidated shares when the US Fed made its first hike to interest rates from zero in mid-December 2015.