END_OF_DOCUMENT_TOKEN_TO_BE_REPLACED

GOLD PRICES escaped the lowest weekly close in 4 months on Friday, rallying $10 per ounce against a weakened US Dollar to regain last weekend's level as Asian stock markets led a wider drop in  European and then Wall Street equities.
Trading back at $1464 by the close of UK trade, the gold price in US Dollars has still lost 6.0% from September's 6.5-year high.
Major government bond prices also rallied meantime, erasing a slight rise in longer-term US interest rates higher and making 10-year German Bund yields a little more negative from last Friday's finish at -0.36% per annum.
"Looking forward," says a note from analyst Bernard Dahdah at French bullion bank Natixis, "the risk for growth in the US is on the upside" after this week's GDP and durable goods data both beat Wall Street expectations.
Because the 22% jump in gold prices in summer 2019 "was mainly driven" by Fed rate cuts, Dahdah goes on – and with that rate-cutting cycle "now concluded" – "our price forecast for 2020 has been revised down to an average of $1370.
"That said, we expect limited downside risk due to the substantial $12.5 trillion worth of negative yielding debt, which will put a floor under gold."
That figure peaked at $17 trillion as gold prices peaked almost 3 months ago. 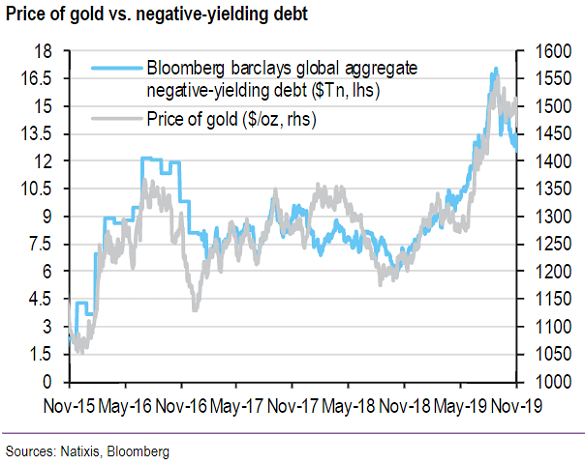 On the data front Friday, Japan's industrial output shrank 4.2% last month from September according to figures from Tokyo, sinking 7.4% on an annual basis.
Neighboring tech-giant South Korea also saw its industrial output shrink – down 2.5% in October from the same month last year – along with private consumption and fixed-asset investment.
Korean exports fell for the 11th month running, with economists pointing to the US-China tariffs dispute as causing a global decline in trade volumes.
Germany's retail sales and France's consumer spending for October also came in Friday weaker than analysts forecast.
UK household borrowing meantime grew, new data said, thanks to a boom in unsecured credit that contrasted with a surprise drop in new mortgage approvals.
"Demand for gold from the world's two largest consumers has also been weak," says Dahdah at Natixis.
Shanghai premiums over London quotes for gold landed in China this week averaged just $3.15 per ounce.
Barely one-third the usual incentive for new imports, that reflects weak demand versus supply in the metal's No.1 consumer nation.
No.2 India will meantime follow last month's very weak Diwali festive gold sales with new laws making hallmarking of gold jewelry mandatory from 1 January 2020, local media report today – a move set to "hurt gold sales which are already witnessing a slowdown" according to industry figures.
" Failure to comply could result in restrictions on Indian gold products by other WTO signatory countries," says The Print.
But "Lack of awareness among jewellers and consumers is a major hurdle," says Santosh Salunkhe of the Indian Association of Hallmarking Centres, "[and] there is no demand for hallmarked jewellery."
Refiners recycling Indian jewelry report that, instead of the 91% purity promised to (and paid for by) consumers wanting the country's standard 22-carat grading, the average fineness is just 60%.
With US stock markets failing to extend their run of new all-time highs after yesterday's Thanksgiving holiday, the Euro Stoxx 600 index halved the week's earlier gain to  rise 0.8% from last Friday's finish.
Gold priced in the single Euro currency meantime erased a 0.3% drop to trade little changed for the week at €1328.
UK gold prices today held this week's drop however, trading less £10 per ounce above Wednesday's 4.5-month low of £1123.