END_OF_DOCUMENT_TOKEN_TO_BE_REPLACED

GOLD PRICES fell through 'key support' at $1835 per ounce on Monday, extending Friday's retreat in Asian and London trade as the Democrat Joe Biden administration in the United States confirmed a second term for Jerome Powell as chair of the US Federal Reserve, disappointing hopes that the more dovish Lael Brainard would replace him, writes Atsuko Whitehouse at BullionVault.
Nominating Brainard for vice-chair, "America needs steady, independent, and effective leadership at the Federal Reserve," said the White House's press release, "so it can advance its dual goals of keeping inflation low and prices stable, as well as creating a strong labor market that broadly benefits workers with better jobs and higher wages."
With Thursday's Thanksgiving holiday and then Black Friday shopping in the US meaning this will be a short 3-day week for the world's largest financial markets, the $30 per ounce plunge in gold prices came despite solid growth in gold-backed ETF investment funds, plus the most bullish position among speculators in Comex futures and options since the gold price peaked above $2000 in late-summer 2020.
It also followed two Federal Reserve policymakers suggesting that the US central bank should taper its QE stimulus more quickly as inflation runs at 3-decade highs.
"The rapid improvement in the labor market and the deteriorating inflation data have pushed me towards favoring a faster pace of tapering and a more rapid removal of accommodation in 2022," said Fed governor Christopher Waller in a speech on Friday.
Current vice-chair Richard Clarida then said separately that he sees an "upside risk" to inflation, also expecting "very strong" economic growth in the fourth quarter of 2021.
With the gold price dropping on Friday, gold-backed ETF trust funds expanded, snapping the usual pattern of moving in the same direction as prices to give the SPDR Gold Trust (NYSEArca: GLD) its largest 1-day growth since June at 0.8%.
The smaller iShares gold ETF (NYSEArca: IAU) also saw net investor inflows of 0.3%.
Latest data from US regulators the CFTC meantime showed that hedge funds and other leveraged speculators in Comex gold futures and options grew their bullish betting sharply in the week-ending last Tuesday, but they left their bearish betting as a group almost unchanged at the smallest in 3 months.
Overall, that pushed the net long position of Managed Money traders to the biggest since the week-ending 15 September 2020, when the price was approximately $100 higher.
Expanding by 65% in just 2 weeks as financial traders have digested the latest US Federal Reserve announcement, plus October's US payrolls and consumer-price inflation data, the Managed Money's net long has reached the notional equivalent of 500 tonnes of bullion. 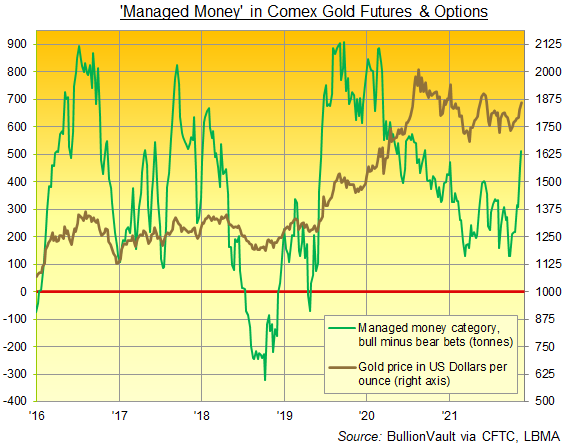 "Gold's biggest short-term threat remains the tripling of futures long held by funds during the past seven weeks to a 14-month," cautioned the latest trading note from derivatives platform Saxo Bank's strategy team Monday morning.
"Most of that buying being technically driven, the risk of long liquidation [is] now looming on a break below the support level of $1830-1835."
Spot gold prices today sank almost $30 per ounce from Friday's finish, dropping to $1816 after breaking up through what had proved resistance around $1835 on the shock US inflation data of 10 November.
The Dollar Index – a measure of the US currency's value versus its major peers – meantime extended Friday's new 16-month highs as surging Covid-19 cases across the 19-nation Eurozone saw Austria impose its 4th national lockdown.
Ten-year US Treasury yields – a benchmark rate for government as well as many finance and commercial borrowing costs – snapped a 3-day drop to rise 3 basis points toward 1.60% per annum.
Inflation in the US Consumer Price Index last month reached 6.2% from 12 months before.
Overall, the total number of Comex gold futures and options contracts open across the market has now reached the highest in a year, holding above 800,000 for the first time since 10 November 2020 – just after Pfizer's positive Covid-19 vaccine news crushed gold prices by $100 in a day.