END_OF_DOCUMENT_TOKEN_TO_BE_REPLACED

GOLD PRICES gave back an overnight $10 rally in London trade and then sank to new multi-month lows Friday, heading for the worst weekly plunge versus a rising US Dollar since November 2016 as 'safe haven' bonds also sank but world stock markets neared new record highs.
Trading down through $1460 to the lowest Dollar price since start-August, gold lost over 3.5% from last Friday's benchmarking in London's bullion market.
European stock markets slipped but headed for a 1.6% weekly rise, nearing their best Friday finish since the record peak of mid-April 2015, while New York's S&P500 finished Thursday with a new all-time high.
Western government bond prices continued to tumble in contrast, driving the interest rate offered by 10-year US Treasury bonds up above 1.90% per annum – jumping one-fifth of a percentage point for the week to the highest since end-July.
With Treasury yields surging and gold prices plunging on Thursday – down $25 inside 2 hours of yesterday's New York opening – Bloomberg reports that giant US investment banks J.P.Morgan and Citigroup both advised clients to cut their 'safe haven' bets on bonds and bullion.
Over the last half decade, 10-year US yields have risen this quickly or faster in only 11 weeks.
Gold prices fell in all of them. 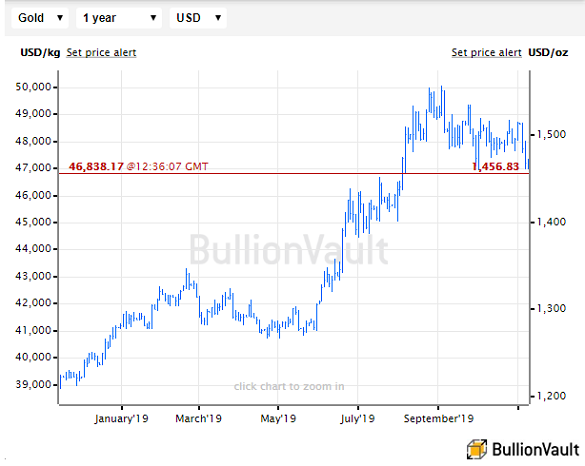 "[We see] signs of a cyclical recovery, easing geopolitical tensions [and] synchronized monetary easing" from major central banks looking to support financial markets, said J.P.Morgan's note to clients yesterday after news broke that a US-China trade deal is looking possible.
"Given the positivity that is reflected in equities and rates markets," says a note from Swiss investment and bullion bank UBS – which saw "upside" in gold at $1510 this time last month – "this raises the risk that further improvements towards a credible and comprehensive trade deal would trigger substantial unwinding in the gold market."
Shanghai's stock market fell Friday as new data said China's exports of goods fell for the 3rd month running in October, down 0.9% from a year ago as imports sank 6.4%.
https://www.cnbc.com/2019/11/08/china-october-trade-beijing-releases-imp...
After the UK's two main political parties both set out big spending promises for next month's general election, Japan's Prime Minister Abe today told his cabinet "to compile a new economic [stimulus] package" of infrastructure spending "to guard against the chance overseas risks may hurt Japan's economy."