END_OF_DOCUMENT_TOKEN_TO_BE_REPLACED

GOLD PRICES failed to hold a rally above $1190 per ounce for the second day running in London trade Wednesday, dropping back as the US Dollar rose and world stock markets fell again amid fresh worries over Italy's government deficit and the UK's impending Brexit from the European Union.
The Chinese Yuan held its lowest value against the Dollar in 17 months despite a senior Beijing official expressing "optimism" about resolving the tit-for-tat trade war tariffs with Washington.
Gold also fell against a weakening Euro, erasing most of last week's 1.7% gain to trade back down at €1032 per ounce.
Milan's FTSE MIB stock index meantime fell for the 8th session in two weeks, helping pull the EuroStoxx 600 3.2% below last Wednesday's close, as Italy's government paid the highest borrowing cost in half-a-decade to raise a 1-year loan from the bond market.
Investors locked in a yield of 0.94% on €6 billion of new Italian debt.
Greece meantime paid an annualized 0.65% on €625m of 13-week Treasury bills today.
Yields on 1-year bonds from all other Eurozone states – including Spain and Portugal – held well below zero, with investors willing to lose 0.59% of their money to hold Germany's short-term government debt.
"Should I change my policies – my agreement with Italians – on the basis of what some speculators decide in the morning? No," said Italy's deputy prime minister Matteo Salvini of the right-wing Lega Party today, defending his coalition government's plan for a 2.4% budget deficit in 2019.
Vowing that Italy's 10-year spread over German Bund yields won't reach 4 percentage points – a level last seen in the crisis of 2012 – Salvini also said he wants Italian residents to get a tax break on investing in Rome's debt.
The BTP-Bund yield spread today eased back from Tuesday's peak, but held near a 5-year record above 3 percentage points.

Italy checking all the boxes in terms of how not to react to a building market crisis; demonise “speculators”; draw tempting lines in the sand; impugn those able to provide a backstop; forlorn pleas for locals to buy debt.

The gold price for UK investors meantime fell back to £902 per ounce, just above its lowest level since 2016's shock Brexit referendum result, as the Pound rallied on the currency market amid rumors that a Brussels-London deal for the UK's exit from the European Union next March could be announced as soon as Monday.
With the final summit of EU leaders on Brexit due next week, the Pound reached to a 2-week high against the Dollar and a 4-month high versus the Euro. 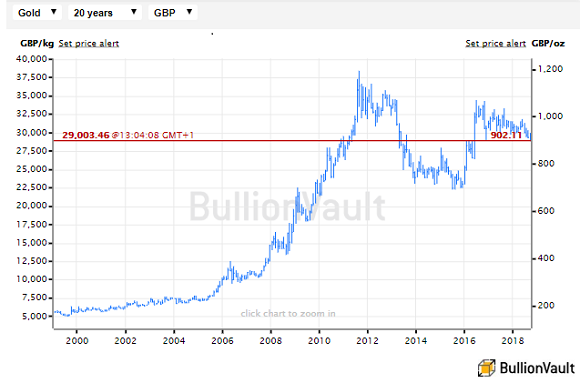 "Brexit is a serious problem for Scotland," said Scottish first minister Nicola Sturgeon in a speech to her Scottish National Party (SNP) conference yesterday.
After 62% of Scots voted to remain in the 2016 ballot, "The only solution is to become an independent country," Sturgeon said.
Brexit could see UK-EU trade fall in half over the long-term, says a new paper from the IW Institute in Cologne, warning Germany's giant auto-manufacturers in particular.
Leaving the UK is likely to cost London some 5,000 financial jobs said City minister John Glen to a parliamentary committee today, calling the situation "stable" but agreeing with Bank of England estimates.
To prepare for "resilience" in local services around the end-March exit, the UK government is now advertising 3 posts nationwide, calling the work "exciting and challenging" and offering to pay 167% of the current UK national average salary.
UK bookmakers Coral and Ladbrokes both put the odds of a "no deal" Brexit at evens today.
Betting on US interest rates meantime puts a 1-in-4 chance on the Federal Reserve raising the cost of borrowing 4 times of more over the next 12 months, up from below 1-in-10 this time a month ago, according to data from the CME derivatives exchange.