END_OF_DOCUMENT_TOKEN_TO_BE_REPLACED

GOLD PRICES held shy of 3-week highs in London on Thursday, trading at $1347 per ounce as the US Dollar fell near 2-week lows against the Euro ahead of today's European Central Bank decision on interest rates – now negative for commercial banks using the ECB's deposit facility – and quantitative easing.
Silver retreated from yesterday's near 4-week highs at $20.13 per ounce, recovering half of an overnight 40 cents drop.
Wednesday's new all-time high global stockmarkets saw the giant SPDR Gold Trust (NYSEArca:GLD) shrink by half-a-tonne to just less than 952 tonnes as stockholders liquidated shares.
Globally however, exchange-traded trust-fund products backed by gold grew their bullion holdings 1.2% in August according to new data published Thursday by the mining-backed World Gold Council market-development organisation, reaching 2,297 tonnes.
Slipping a little over 1% by Dollar value as gold prices retreated, that was still the largest quantity of ETF-held bullion since May 2013 – midway through the metal's worst quarterly price crash in 3 decades. 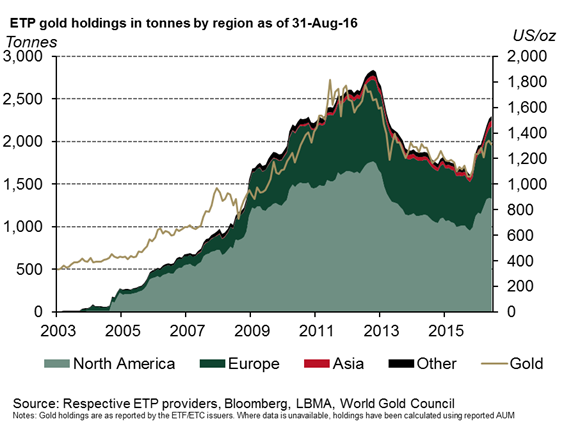 "The increase in European gold ETFs countered declines in North America and Asia," says the World Gold Council.
"ETF flows are incredibly volatile when compared with other [gold-market] fundamentals," says a new research note from Michael Haigh's commodity team at French investment bank and London bullion market-maker Societe Generale.
Analyzing the impact on gold prices of ETF holdings and also the size of net bullish betting by hedge funds in Comex gold derivatives, "The results are extremely intuitive," the research concludes, finding that – for a 10% increase or decrease in ETF flows, the gold price would rise or fall "by approximately 3%" from current levels, "or about $41 per ounce.
So if ETF gold flows "fell back to the low experienced in January 2016," SocGen concludes, "[then] according to our model the gold price would drop by 13% to $1168 per ounce – only $102 off" the metal's 6-year lows of the previous month.
Looking beyond ECB's decision to the US Fed's meeting ending 21 September, "The [US jobs data] out last Friday, followed by poor ISM manufacturing and now poor ISM non-manufacturing has thrown a real spanner in the works regarding the next Fed rate hike," says a trading-desk note from Swiss refiners MKS Pamp.
"We see more potential upside from here with September now looking highly unlikely for rates to move higher," it adds, saying that the gold price's "next important resistance sits well within striking distance at $1353.50 – the downtrend dating back to July 6's post-Brexit high, which has held...4 times now."