END_OF_DOCUMENT_TOKEN_TO_BE_REPLACED

The United States and China are set to hold lower-level trade talks on Tuesday and Wednesday this week - just before the new retaliatory tariffs from Washington and Beijing take effect, raising hopes of a breakthrough in the months-long dispute between the world's two largest economies.

The US Dollar gained while the Euro slipped amid optimism over the anticipated meeting.

Gold rose $5 to touch $1185, continuing its corrective bounce after the metal slid to a 19-month low of $1160 last Thursday but failed to gain significant support from fears surrounding the ongoing Turkish crisis. Gold saw its sixth weekly decline and lost 2.2% in the last week alone while the US Dollar rally was fuelled by a sell-off in emerging market currencies. 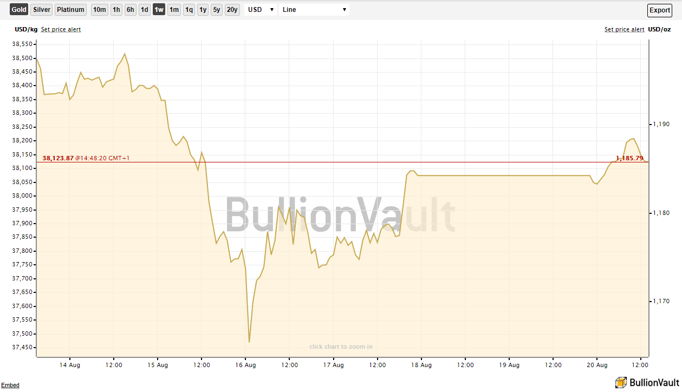 Gold trading in Turkey has doubled amid the dramatic volatility of the Turkish Lira.

The Dollar-priced bullion declined despite months of trade bickering between the US and other countries as many investors preferred the fast advancing greenback to gold.

"Though the overall trend remains slightly weak for gold as there are no key fundamental cues favouring upside at the moment, value-buying in this oversold territory is highly likely to underpin prices," said Sugandha Sachdeva, vice president at stockbrokers Religare Securities Ltd.

"Gold prices will remain highly susceptible to Dollar strength in the near term," Lu added indicating that a Dollar appreciation and risk appetite tend to undermine gold.

In other metals, silver oscillated slightly under last week's close of $14.80 per ounce while platinum and palladium rose around 1% each to $795 and $919 respectively.

"The world, to some degree, has been quite used to bad news."

"If you were to go back seven or eight years, any one of the trade wars, or what's happening in the Middle East, or China, Brexit, the rise of the far left and far right, any one of those events would have been enough to make a fairly significant impact on volatility of prices of precious metals," Hayes explained.

Other analysts, in contrast, believe that risk-off environment is not even here yet.

"If you look away from the ructions in emerging markets and some industrial commodity markets, the dynamics have not really conformed to 'risk-off' conditions," according to ICBC Standard Bank commodities strategist Marcus Garvey.

"In fact, gold’s performance is in keeping with still strong developed market equities – primarily in the US – and a strong US Dollar."

"Gold has underperformed our expectations but that is really the other side of the coin to the Dollar outperforming."

"[However] it is time to bottom out as we expect limited upside in the US Dollar, a stabilization and some recovery in the Chinese Yuan," reckons Dutch bank ABN Amro's analyst Georgette Boele.

Investors will closely watch US Fed Chair Jerome Powell's speech at the Jackson Hole Symposium this Friday for further clues on the market outlook. A 90% probability of a US rate hike at the next Open Market Committee meeting in September has already been priced in.

Over in Europe, Greece has now completed the final bailout programme after eight years of severe austerity. In one of the biggest bailouts in global financial history, the country received more than €260 billion in rescue loans from the European Central Bank and the International Monetary Fund.

Meanwhile, business leaders' confidence in the UK has dropped to its lowest point this year, reflecting the uncertainty over a successful Brexit deal just 8 months before Britain's departure from the European Union. The net confidence level fell to -16%, compared to +3% in April, according to a new survey.

In Venezuela, after the recent drone attack, President Nicolas Maduro carried out a 95% devaluation of the local currency Bolivar over the weekend. Already experiencing a severe inflation, prices are currently rising at an annualized rate of 108,000%, according to Bloomberg’s Café con Leche index