END_OF_DOCUMENT_TOKEN_TO_BE_REPLACED

Spot gold increased by 1% to $1515 per ounce while European shares fell as Germany’s GDP shrank by 0.1% between April and June, fuelling fears of a recession for Europe’s largest economy.

The 10-year German bond yield dipped to -0.624%, a fresh record low that takes its fall this year to almost 90 basis points as the German economy slipped into negative growth. 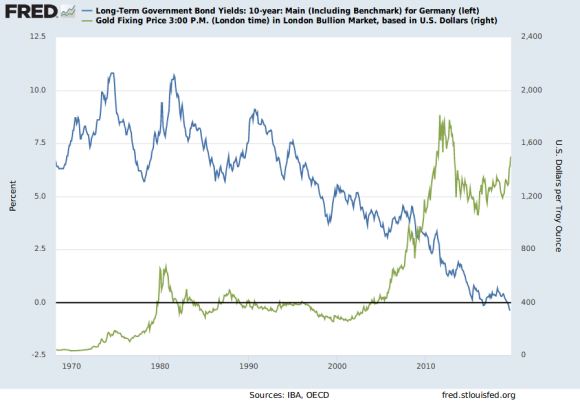 Growth across the Eurozone halved in the last quarter, from 0.4% to 0.2% as Germany’s contraction held the region back, while industrial production plunged by the most in more than three years in June.

President Donald Trump on Tuesday backed off his 1st September deadline for 10% tariffs on remaining Chinese imports, delaying duties on cell phones, laptops and other consumer goods, in the hopes of blunting their impact on US holiday sales.

“We’re doing this for the Christmas season,” Trump told reporters as he left New Jersey for an event in Pittsburgh.

Chinese Vice Premier Liu He spoke with US Trade Representative Robert Lighthizer and US Treasury Secretary Steven Mnuchin on Tuesday evening, China’s Ministry of Commerce said in a statement.  It also said, “Both sides agree to talk again on the phone within two weeks.”

Asian stocks rallied Wednesday after the US decision to postpone some tariffs on Chinese goods but pared the gains after new data about China’s retail sales and industrial production came in worse than expected, with industrial output growth cooling to a more than 17-year low.

The gap between 2 and 10-year yields dropped below zero in the US and UK after a wave of soft economic data globally.

Hong Kong airport has resumed operations after a night of chaos which saw protesters clash with riot police as Chinese officials condemned the disruption that paralysed the international hub as “near-terrorist acts”.

After hundreds of flights were cancelled this week when protesters flooded the terminal buildings, the Airport Authority said it had obtained a temporary injunction banning protesters from entering certain areas.

President Trump said on Tuesday that the situation in Hong Kong was tricky but he hoped it would be resolved “for liberty” without anyone getting hurt or killed. He then tweeted:

Our Intelligence has informed us that the Chinese Government is moving troops to the Border with Hong Kong. Everyone should be calm and safe!

Platinum in the meantime, edged down to $851 per ounce.