END_OF_DOCUMENT_TOKEN_TO_BE_REPLACED

GOLD PRICES held onto yesterday's near-$30 jump in Asian and London bullion trading on Thursday, moving above $1420 per ounce after the chairman of the US central bank signalled rate cuts are about to begin.

Betting however rose on a half-point rate cut from the US Federal Reserve at this month's meeting, pricing it near a 1-in-3 chance against a smaller quarter-point cut according to data from US derivatives exchange the CME. 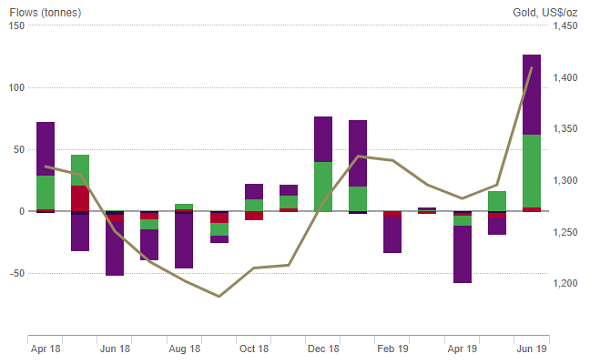 Without confirming the size of July's cut, US Fed chair Jerome Powell yesterday told Congress that he thinks cuts are needed to short-term interest rates.

Powell also said social-media giant Facebook's payments system Libra "cannot go forward" until "serious concerns" are addressed, and said he won't quit as Fed chair if asked to resign by President Trump - now a vocal critic after nominating him only in 2017.

"Powell's testimony made sure that there is a rate cut on the cards this month," Reuters quotes Singapore bank OCBC's economist Howie Lee.

"He has provided a loser monetary policy base for gold prices gain further."

New data today said inflation in Germany was stronger than analysts expected in June, but rising to 1.5% the annual rate badly lagged the European Central Bank's target of 2.0%.

Crude oil meantime extended its rally, reaching $67.60 per barrel of Europe's Brent benchmark, after the British Royal Navy said it prevented Iran from seizing a UK tanker passing through the Persian Gulf.

The Bank of England said this morning it has seen "some improvement in the preparedness of the UK economy for no-deal Brexit," now scheduled for 31 October.