END_OF_DOCUMENT_TOKEN_TO_BE_REPLACED

GOLD PRICES held firm against a weaker US Dollar on Friday, slipping further from this week's 1-month highs in Euros and UK Pounds as global stock markets finally found a floor following the US Federal Reserve's steepest hike to interest rates in almost 3 decades.
Priced in the Dollar, gold traded $15 above last Friday afternoon's London benchmark price of $1830 per ounce, hit during sudden and sharp volatility on news that US inflation didn't slow as traders and analysts expected in May.
Ahead of today's New York open, global stock markets showed their worst weekly loss since the Covid Crash of March 2020, dropping 5.6% on the MSCI World Index and hitting fresh 18-month lows and falling almost 1/4 from January's record high.
Wednesday's rate-rise from the US Federal Reserve marked its first 3/4-point hike since November 1994, when the Fed raised rates from 4.0% to 4.75% "to keep inflation contained...against the background of evidence of persistent strength in economic activity."
Gold prices were unmoved on that decision 28 years ago, ending the week 0.3% lower at $384 per ounce.
Inflation in the headline US consumer-price index was then running at 2.6% per year with core PCE inflation – the Fed's preferred measure, and now with a target of 2.0% – was running at 2.2%.
The CPI index last month rose 8.5% from a year before and core PCE rose 4.9% according to analyst estimates.
Last time US inflation was this strong, the Fed Funds rate was held above 10%. 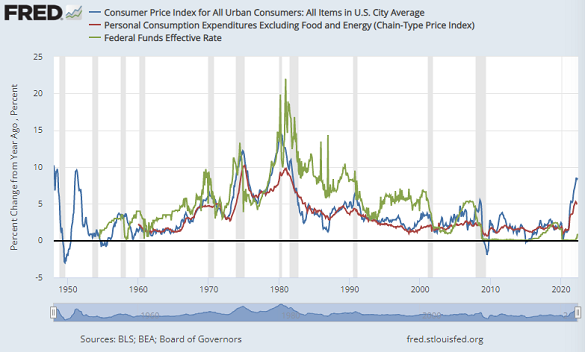 " Fed attacks inflation," says a headline at AP News, while the New York Times uses the words "to tackle", NPS uses the words "to combat" and the Financial Times says the move aims "to tame scorching inflation."
"Powell Sets Path to Restrain Economy and Stop Runaway Inflation," says Bloomberg meantime, reporting this week's comments from the Fed chairman about raising rates again by 50 if not 75 basis points at next month's meeting.
" [But] he was clearly behind the curve and clearly late" in starting to raise from zero," says Gary Cohn, a former president of investment bank Goldman Sachs and economic adviser to ex-US President Donald Trump, "and the runway for a 'soft landing' for the economy is now much shorter and narrower."
The Swiss Franc " is now a better hedge against spiraling inflation than gold" reckons a note from German investment group Deutsche Bank, calling yesterday's half-point hike to interest rates by the Swiss National Bank "a considerable surprise to the domestic market in particular, where expectations for any policy change had been minimal going into this meeting.
"The signal to the market is even clearer...[T]he SNB now desires a stronger Swiss franc. The rationale is clear: to prevent the transmission of excessive inflation from the Eurozone."
Faced with a jump in Italy's borrowing costs to the Eurozone debt crisis levels of a decade ago, the European Central Bank this week vowed to re-invest money it makes from maturing government bonds in its QE portfolio "with a view to preserving the functioning of the monetary policy transmission mechanism" as it starts to raise short-term rates across the 19-nation currency union from below zero next month.
Inflation for the Eurozone's 350 million citizens averaged 8.1% per year last month, Eurostat said Friday.
Euro gold prices today traded above €1750 per ounce, the highest weekly close since early May.
The UK gold price in Pounds per ounce meantime slipped below £1500 as Sterling rallied against the Dollar despite the Bank of England yesterday following the Fed's 3/4-point hike with another 0.25 rise in its key interest rate.
Now at 1.25%, Bank Rate lags UK consumer-price inflation by almost 9 percentage points, the worst margin for savers since the IMF crisis of the mid-1970s.