END_OF_DOCUMENT_TOKEN_TO_BE_REPLACED

GOLD PRICES rallied back near $1300 per ounce on Wednesday but fell to 2-week lows for European investors as Eurozone bond yields rose after two key Euro central-bank officials said Frankfurt remains on track to start reining back its historic monetary stimulus.
Bullion prices in No.2 gold consumer nation India also retreated as the Rupee hit a 1-month high following the Reserve Bank's first hike to interest rates in 4 years amid rising inflation and an earlier 6% plunge in the INR versus the Dollar for 2018 to date.
Italian bond prices fell faster than other Eurozone debt, driving the yield spread over benchmark German Bund interest rates higher after the new right- and leftwing government's prime minister, Giuseppe Conte, promised "radical change".
Gold priced in the single currency dipped below €1100 per ounce, the first time since Italy's new Eurosceptic coalition began trying to form a government in late-May.
Head of the German Bundesbank Jens Weidmann today said it looks "plausible" that rising inflation data will allow the European Central Bank to end new QE purchases of government bonds by the close of 2018.
A key contender to replace Mario Draghi as ECB president next year, Weidmann last month called an interest rate hike in mid-2019 – the first since the ECB raised rates just before Lehman Brothers collapsed in 2008 – a "realistic" possibility.
Chief ECB economist Peter Praet meantime called annual pay growth of 1.9% across the 19-nation currency zone an "upsurge" in a speech on Wednesday, but noted that the central bank's huge stockpile of long-dated government bonds "will continue to put downward pressure on longer-term interest rates well beyond the end of our net purchases."
After accounting for inflation in consumer prices, the real yield on longer-term Eurozone bonds has over the last half-decade shown a strongly negative relationship with the direction of gold priced in the single currency.
Facing calls in autumn 2012's Euro debt crisis for Greece, Spain or even 'core' member Italy to quit the single currency, the ECB vowed to do "whatever it takes" to preserve the union, moving first to quantitative easing and then cutting interest rates below zero on commercial bank deposits.
Euro-gold has since shown an average 12-month correlation of -0.48 with real Eurozone bond yields.
That figure would read +1.0 if they moved in lockstep together, or -1.0 if they moved exactly opposite. 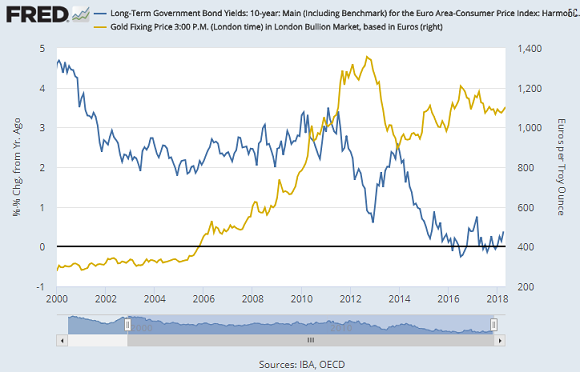 "Global growth is expected to decelerate over the next two years," forecast the World Bank yesterday, "as slack dissipates, major central banks remove policy accommodation, and the recovery in commodity exporters matures."
"Rising debt levels make countries more vulnerable to higher interest rates," warned World Bank development economics director Ayhan Kose, saying that emerging-market policymakers need to prepare for "financial market volatility as advanced-economy monetary policy normalization gets into high gear."
With the Chinese Yuan strengthening to a 1-week high versus the Dollar on the FX market Wednesday, Shanghai gold prices rose more $6 per ounce above global quotes, the strongest premium since mid-May but still one-third below the typical incentive for new bullion-bar imports to the No.1 consumer gold consumer nation.
Ahead of today's RBI interest-rate rise, wholesale prices in India had earlier shown a small $1 premium above London quotes, suggesting improved demand, but new data showed that bullion imports fell almost 40% in May from the same month last year.
"Anything that puts sand in the wheels of global trade is a risk to global growth," says the World Bank report's author Franziska Ohnsorge, calling "the threat of trade protectionism...a real risk."
After six of the G7 group of developed nations rebuked 7th member the US on Saturday over the "negative impact" of its new tariffs ahead of this week's meeting in the Quebec resort of La Malbaie, Canada, the European Commission today said it will impose tariffs on up to $3.4 billion of US imports as early as next month.
The governments of Britain, France and Germany have now also written to Washington asking that EU companies active in Iran are spared from the re-imposition of US sanctions against the Middle Eastern state over its nuclear research program.
For British investors, the UK gold price in Pounds per ounce today dipped to a 2-week low of £964 as Sterling rallied on the FX market despite fresh concerns over Brexit negotiations for a free trade agreement after March 2019.
Ahead of Brexit, "European governments are advising businesses not to use British parts in goods for export," says Sky News, quoting a warning over 'rules of origin' problems from the Dutch authorities to manufacturers in the Netherlands.
The UK car industry has, according to Sky, "explicitly told the government" that it faces major problems exporting to the European Union after Brexit under the kind of arrangements currently proposed by Theresa May's ruling Conservative Party.