END_OF_DOCUMENT_TOKEN_TO_BE_REPLACED

GOLD PRICES fell to new 2018 lows against a rising Dollar for the second day running on Wednesday, falling further below $1300 per ounce as world stock markets dropped and longer-term interest rates touched new 7-year highs after stronger-than-expected US economic data.
After Tuesday saw March's retail sales revised higher while New York State manufacturers reported the strongest inflation since 2011, the Atlanta Fed now sees US GDP growing 4.1% per year between April and June, the strongest quarter since 2004 and higher than all the 'blue chip' economic forecasts it tracks.
Betting on US Fed futures contracts today put a 95% certainty on the Federal Reserve raising its key interest rate at mid-June's meeting according to the CME's FedWatch tool, with a 44% chance of 2 further rate rises after that in 2018 up from 34% this time last month.
"As rates rethink the Fed outlook," says FX strategist Kit Juckes at investment bank Societe Generale, "the Dollar remains king of the FX market.
"Last time this happened, it took a significant US equity market correction to stop the move."
Major government bond prices extended their drop on Wednesday, forcing up the yield offered to investors as well as longer-term financing costs.
The last time 10-year US Treasury debt offered today's 3.06% yield, Dollar gold prices were $300 per ounce higher. 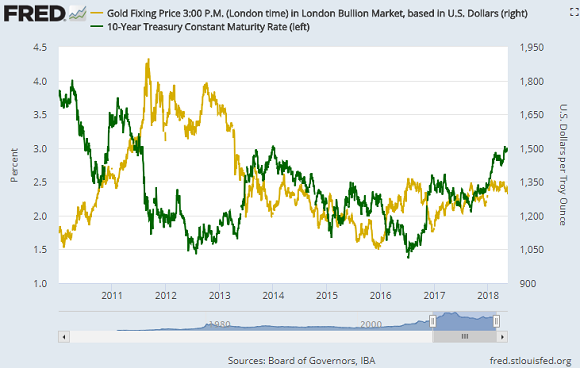 Gold prices opened Wednesday in Shanghai 1.4% lower for this week so far against the Yuan, sparking what Swiss refining and finance group MKS Pamp's daily note calls "persistent demand" in wholesale trade.
"Good volumes were seen today in Asia, although price action remained fairly contained for the yellow metal," it adds, with speculative traders and wealth management sellers "countering Asian physical buying."
Shanghai premiums edged up to $7.50 per ounce above quotes for London settlement at China's afternoon benchmarking, still below the typical incentive for new imports into the No.1 consumer nation.
Inflation across the 19-nation Eurozone – the world's largest economic bloc – held at 1.2% per year in April, new figures said today.
Preliminary German GDP data for the first quarter yesterday missed analyst expectations, notes Belgian refining and technology group Umicore in a note, helping push the Euro lower against the Dollar.
The Dollar then jumped against emerging-economy currencies as the Financial Times reported Turkey's president Recep Tayyip Erdoğan telling a lunch in London that he plans to become more "influential" over the central bank's interest policy – comments causing "shock and disbelief" among the major investment-fund managers present.
Inflation in Turkey – the No.5 gold consumer nation – last month rose near 11% per year.
The Central Bank of the Republic of Turkey's key lending rate has been held at 8% since late 2016, when Erdogan railed against tightening policy, claiming that "higher interest rates cause inflation, not tomatoes, not pepper."
With the Lira today setting yet more all-time record lows against the Dollar, " Necessary steps will be taken, also considering the impact of these developments on the inflation outlook," said the CBRT in a statement.
Priced in the Euro gold meantime halved Tuesday's drop to trade at €1095 per ounce, while the UK gold price in Pounds per ounce also traded around 2-week lows at £955.
Silver meantime matched gold's 2.5% loss against the Dollar for this week so far, trading at 1-month lows of $16.25 per ounce.
Platinum touched its lowest since mid-December at $891 per ounce, down 3.3% from last Friday's finish.