END_OF_DOCUMENT_TOKEN_TO_BE_REPLACED

GOLD PRICES set new 13-month highs near $1280 per ounce Friday in London, swiftly recovering a $25 drop after new US data showed stronger-than-expected jobs growth in February.
Non-farm payrolls expanded by 242,000 on the Department of Labor's estimate, almost 30% ahead of consensus forecasts.
Average US earnings slipped 0.1% last month, the jobs data said, while the average working week declined to 34.4 hours, the shortest since February 2014.
The US Dollar briefly spiked on the FX market, but then fell to new 1-week lows at $1.10 per Euro, while New York's stock markets hit 2-month highs.
Industrial commodities extended their rally, and silver jumped above $15.60 per ounce, gaining more than 6% from last weekend.
Gold prices traded 4.3% higher from last Friday's finish.
"NIRP policy ex-US and stickiness in US inflation could push US real bond yields lower," says a note from US investment bank J.P.Morgan's global strategist Jan Loeys, referring to Europe and Japan's negative interest-rate policies and pointing to the rate of interest paid by Treasury bonds after accounting for inflation.
"That could further support gold prices, as gold's best performance has historically occurred during a low and falling US real interest-rate environment, with monthly returns averaging 1.4% compared to the long-run average of 0.4%."
Ahead of tomorrow's 7th anniversary of UK interest rates being cut to a record-low of 0.5%, gold priced in British Pounds today touched £900 per ounce – a price first seen in November 2010, last seen in August 2013, and still some 25% below the peak of September 2011.
Then the world's largest exchange-traded trust fund by value at that time, the SPDR Gold Trust (NYSEArca:GLD) swelled in size yet again Thursday, with demand for its shares taking the quantity of gold needed to back their value up to 793 tonnes.
The GLD has now recovered more than one-fifth of its 53% shrinkage from 2012's peak gold holding to December 2015's eight-year low.
Adding 150 tonnes since New Year alone, the GLD hasn't grown this fast since global stock markets bottomed – and central-bank QE began – at the depths of the crash following Lehman Brothers' collapse. 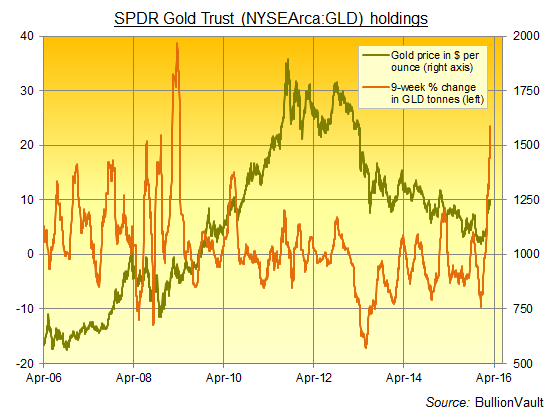 "Generally I agree with the benefits of owning gold," says one bullion-bank trader in a note, "[especially given] the current market mindset and rising uncertainties.
"I would just remind buyers to beware, the upside is probably a long and winding road. A healthy entry point seems necessary."
The largest silver ETF, the iShares Trust product (NYSEArca:SLV), also grew Thursday, needing its largest 1-day inflow of metal to back the value of its shares for at least 18 months.
Adding 169 tonnes, that took the SLV's silver backing to a 3-month high of 9,946 tonnes,
Shares in Canadian asset manager Sprott's closed-end silver trust (NYSEArca:PSLV) ended Thursday at a premium of 3.2% to spot prices, the most expensive gap for buyers of the stock since February 2015.
The PSLV's premium to the value of silver it owns peaked above 34% in January 2012, falling to a discount of 1% in mid-2015.
US Treasury bond prices meantime fell after Friday's US jobs news, pushing 10-year yields to 1-month highs at 1.86% per year.
Betting on the likelihood of a June rate rise from the US Federal Reserve rose marginally, putting the odds at 36% against 33% yesterday.
Odds on a hike at the Fed's March meeting, however, held below 2%.