END_OF_DOCUMENT_TOKEN_TO_BE_REPLACED

GOLD PRICES steadied at multi-week lows on Wednesday as the Dollar paused its gains but world stock markets followed Wall Street lower after new Federal Reserve chair Jerome Powell told US lawmakers to expect further interest rate hikes.
Extending its sharpest 1-week drop of 2018 to date, gold fell another $20 per ounce between Tuesday morning and the end of London trade yesterday, bouncing off a 2-week low of $1314 overnight.
Wednesday saw the metal hold little changed at $1318 as commodities rallied with major-economy bond prices, edging longer-term interest rates lower.
Giving what journalists called "a markedly bullish assessment of the US economic outlook" in his first testimony to the House financial services committee in the role of Fed chief, "My personal outlook for the economy has strengthened since December," Powell said on Tuesday.
"Some of the headwinds the US economy faced...have turned into tailwinds.
"The [Fed] will continue to strike a balance between avoiding an overheating economy and bringing price inflation to 2% on a sustained basis."
Headline US inflation in the cost of living has now exceeded the Fed's 2.0% annual target every month since September, matching the start of 2017 as the longest such stretch since 2011-2012.
Two-year US Treasury yields rose Wednesday to new 9.5-year highs at 2.27%, but longer-term 10-year yields edged back below 2.89% after failing to breach last week's 4-year high of 2.94%. 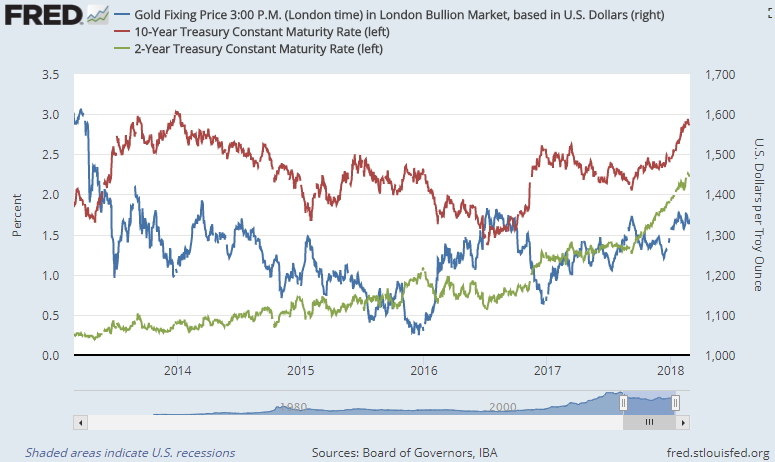 "Equities and risk assets may wobble as yields rise, but stronger growth should be good for corporate earnings," says asset-management giant BlackRock.
Providing the Fed doesn't raise rates more than expected, says Italy's UniCredit bank, "we do not believe that his testimony threatens to derail risk appetite, at least not in a sustained way."
The Euro currency also held little changed from yesterday's sell-off versus the Dollar, trading near 3-week lows at $1.22
The UK gold price in Pounds per ounce meantime rose back above last week's closing level to trade at £953 as the minority Government of Prime Minister Theresa May rejected a European Union proposal that Northern Ireland remain inside the EU's single market to avoid a 'hard border' with the Republic following Brexit next spring.
Sterling has now lost 5% from January's spike back to Dollar levels not seen since mid-2016's UK referendum on quitting the EU.
Overnight in Asia, gold premiums in India – allowing for its 10% duty on gold shipments – rose to $1.50 per ounce above London quotes in the key wholesale hub of Ahmedabad, the highest incentive this month for new imports to the No.2 consumer nation.
Gold premiums in Shanghai in contrast held flat as Yuan prices fell in lock-step with global Dollar quotes, keeping the incentive for new imports to No.1 consumer China around $8.25 per ounce, almost 10% below average levels.
Silver outpaced gold's rebound versus the Dollar, cutting its loss for the week so far to less than 10 cents at $16.45 per ounce.
Platinum prices in contrast held sharply lower after the German courts ruled Tuesday that cities in Europe's largest national economy can ban older diesel-engine vehicles, "sound[ing] the death knell for diesel vehicles in Europe with heavy losses for owners and carmakers," according to newspaper Handelsblatt.
With platinum finding over 40% of its end-use demand from diesel autocatalysts – needed to reduce harmful engine emissions – "Ultimately, this creates another headwind for the platinum price," says specialist consultancy Metals Focus.
"It must already contend with largely unsupportive supply and demand and therefore a growing physical surplus."
Now down 4.8% from late-January's 11-month higher however, platinum prices remained 6.1% higher for 2018 so far as New York trading opened on Wednesday.