END_OF_DOCUMENT_TOKEN_TO_BE_REPLACED

GOLD PRICES held onto yesterday's steep rise in all major currencies on Tuesday, trading near 7-year highs in US Dollar terms as world stock markets rebounded but Washington and Tehran threatened fresh violence against each other following last week's assasination of a senior Iranian military chief.
After US President Trump said he's readying 52 targets in Iran – a number matching the number of US hostages taken by the Revolutionary Guard in 1979, and including "cultural" sites, which would constitute a war crime under international law – Tehran's theocratic regime is apparently preparing 13 "revenge scenarios" according to media reports.
"Iran will respond because there was an act of war...combined with an act of terrorism," Tehran's foreign minister Mohammad Javad Zarif told Al Jazeera today.
"We are bound to protect our citizens and our military officials...[but] not in a hurry, not in a hasty manner."
Gold priced in the Dollar moved Tuesday in a $10 range below $1570 – the highest since March 2013 when reached at the start of Monday's Asian trade – and the metal held above €1400 for Euro investors, just 1.3% shy of yesterday's new all-time peak.
UK gold prices in Pounds per ounce held above £1195 – the former peak hit amid the English city riots of summer 2011 – but were still £90 shy of last September's fresh records. 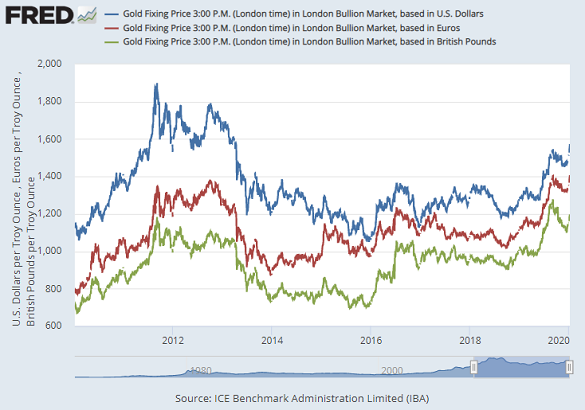 After Wall Street reversed Monday's early drop to close near fresh all-time record highs, Asian and European equities rallied on Tuesday, while crude oil slipped back from its weekend spike to multi-month highs and bond yields held steady.
The state funeral of Qassem Soleimani, head of Iran's elite Quds Force, was meantime suspended in Tehran after a stampede in the massive procession killed at least 40 mourners and injured more than 200.
Killed by a US drone in Baghdad last week, Soleimani "personally" led last October's crackdown in the Iraqi capital against anti-corruption protesters, where at least 180 died and 7,000 were injured in 8 days of violence.
"We in Iran know how to deal with protests," the Quds chief reportedly told Iraqi officials.
November then saw at least 304 people killed in a 3-day crackdown against anti-government protesters in Iran's own capital city, according to Amnesty International.
"Gapping up [Monday] to $1580," says precious metals analyst Rhona O'Connell at brokerage INTL FCStone, gold was "way overbought and the relative strength index is testing recent peaks, which suggests a pullback in due.
"The physical market has also been hit hard."
With Rupee gold prices already hitting fresh record highs last week, dealers in Inida – the No.2 gold consumer nation – were offering bullion at a $13 discount per ounce to global prices, according to Reuters, the steepest since October.
No.1 consumer China has meantime seen premiums over London quotes drop to $3 per ounce – barely one-third the average incentive for new imports – despite the key buying season of Chinese New Year coming in 2 weeks' time.
"I think demand will likely continue to fall," reckons Hong Kong analyst Samson Li at consultancy Refinitiv GFMS, "due to higher gold price and poor consumption sentiment.
"The wild card, as always, will be investment demand."
Delayed data released by US regulator the CFTC confirmed Monday that speculative betting on Comex gold futures and options had already jumped in the week-ending last Tuesday, rising back towards autumn 2019's new record levels.
"The increase in speculative gold length" – net of bearish bets – "was driven by new longs," says World Gold Council strategist John Reade, charting the data on Twitter, "rather than short-covering."
Back in the Middle Eastern crisis, Germany's Chancellor Merkel has accepted an invitation to meet Russia's President Putin at the Kremlin this weekend to discuss the US-Iran escalation.
Before then, Putin will meet tomorrow with President Erdogan of Nato-member Turkey at the Black Sea opening of the new TurkStream natural gas pipeline.
They are likely to discuss the situation in Idlib, north-eastern Syria, where 300,000 people have now fled Russian-backed pro-Assad bombing of rebel forces supported by Turkey amid its offensive against Kurdish separatists following the exit of US troops last October.