END_OF_DOCUMENT_TOKEN_TO_BE_REPLACED

GOLD PRICES jumped Friday lunchtime in London, briefly showing a weekly gain versus all major currencies bar the Canadian Dollar after US jobs data for March came in badly below analyst forecasts and world stock markets struggled to extend the week's earlier rally as trade tensions between the US and China worsened yet further.
Gold then gave back its $5 spike however, trading flat from last Friday's finish at $1324 per ounce.
Non-farm US payrolls expanded by only 103,000 last month, the Bureau of Labor Statistics said, barely half the consensus forecast but with February's strong number revised higher.
Silver also jumped as gold touched $1330, turning a half-per-cent weekly loss into a 0.5% gain at a high of $16.46 per ounce.
Platinum failed to follow however, holding 2.1% down from last Friday's finish after earlier touching a fresh 2018 low at $907.50 per ounce.
Sister-metal palladium – which finds 75% of its annual end-use in catalysts to reduce gasoline-engine emissions – fell harder yet again Friday morning, suffering what one trader called a "rout" to drop back below platinum's Dollar price for the first time since October after overtaking it for the first time since 2001. 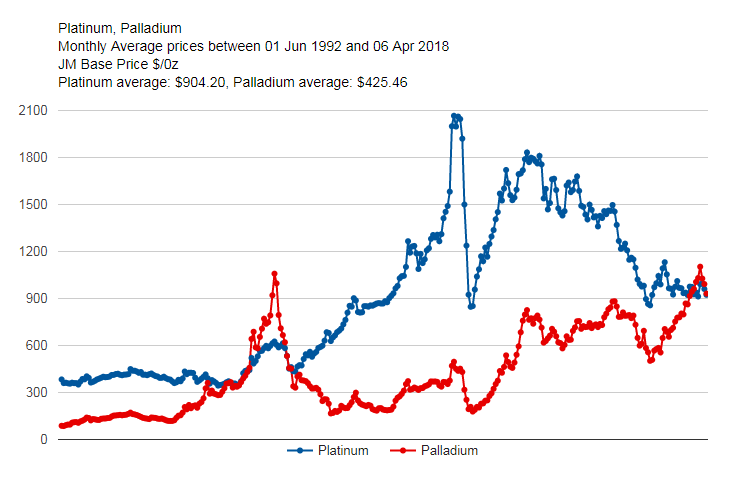 Having surged to all-time record highs in late 2017, palladium is now down 14% year-to-date, a move blamed by the Wall Street Journal on the worsening US-China trade tariffs.
"Base metals prices on the London Metal Exchange are [also] for the most part weaker Friday," says specialist magazine Metal Bulletin's Fastmarkets site, also blaming "more nervousness in metals markets [on] more Trump rhetoric."
Shanghai steel rebar prices have now sunk 25% from end-2017's record high in Yuan terms, while copper today traded over 8% below end-2017's four-year high in US Dollars.
Hitting 6-year highs last October, aluminum prices have since dropped more than 12%.
"Despite the aluminum tariffs, aluminum prices are DOWN 4%," tweeted Trump overnight.
"People are surprised, I'm not! Lots of money coming into US coffers and Jobs, Jobs, Jobs!"
After Beijing said Wednesday that it may meet Trump's tariffs on $50bn of Chinese imports with a 25% charge on more than 100 US products, the White House on Thursday threatened a further $100bn of Chinese imports to the US with higher tariffs.
"We need to have international cooperation," China's state-run Xinhua news agency quotes United Nations secretary-general Antonio Guterres.
"Free trade is a very important contributor to global prosperity."
"This is now getting more serious, and dangerous," says Swiss bank UBS economic advisor and author George Magnus.
Now at $150bn, US tariffs are "targeting about 30%" of Chinese exports to the US, Magnus says, but "China can't respond in kind" because its total imports from the US are only $130bn.
"So where do [Beijing policymakers] go next? US firms could be leaned on, face additional and aggravating regulation, or be sanctioned somehow...but this [would be] another 'casus belli' to the [White House]...[while] other countries in supply chains will be drawn in whether or not they choose.
"Can't see any happy ending here or how [Chinese Yuan] isn't going to take a plunge...Strongman Xi Jinping may play victim, but he's already making strategic errors that will not benefit China which needs a trade war like a hole in the head."
Shanghai's gold market remained closed Friday for the Qing Ming Jie tomb-sweeping holiday, leaving Asian volumes "thin" as "resting orders [to sell] capped the market" according to Swiss refining and finance group MKS Pamp's trading desk
Looking at the price of platinum – which finds two-fifths of annual end-use in catalysts to cut emissions from diesel-engine vehicles, now suffering a prolonged drop in European consumer sales – the metal in January "found stiff resistance at the upper band of [its] 1-year range," says French bank Societe Generale's latest technical analysis, "and has been undergoing a retracement.
"It is now closing in on the decadal [up]trend situated at $900/890, which remains a decisive support area."