END_OF_DOCUMENT_TOKEN_TO_BE_REPLACED

GOLD MINING shares slipped from 3-year highs as bullion prices stalled near mid-July's two-year highs on Wednesday, while Asian stockmarkets closed sharply lower once more but Japanese government bonds steadied from the last 3 days' sell-off.
Western equities also stabilized as European banking shares rallied.
US crude oil held below $40 per barrel. Silver retreated 1% from yesterday's pop to 1-month highs at $20.78 per ounce.
"Gold prices have improved, but gold miners do not yet believe in its longevity," CNBC quotes analyst Alexander Hacking at US financial services giant Citi.
"This is typically a sweet spot of the cycle, with cash flows rising but the miners still focused on cost cutting and capital discipline."
"Gold producer margins have soared," says the latest Precious Metals Weekly from analysts Metals Focus, "as cost cuts finally pay dividends."
Despite slashing executive perks, headcount and investment, gold miners began 2016 with an average margin between cash costs and market prices of just $220 per ounce, says the report.
"Some 25% of the industry [was] loss making" when all-in sustaining costs such as corporate HQ and admin, third-party smelting and refining, and also exploration to maintain current output are included.
"Fast forward seven months and sentiment has dramtically changed," Metals Focus says, with gold 27% higher but the HUI's weighted index of major gold mining equities surging "by an impressive 140%" as margins have risen "nearly 150% to over $500, their highest level since 2012." 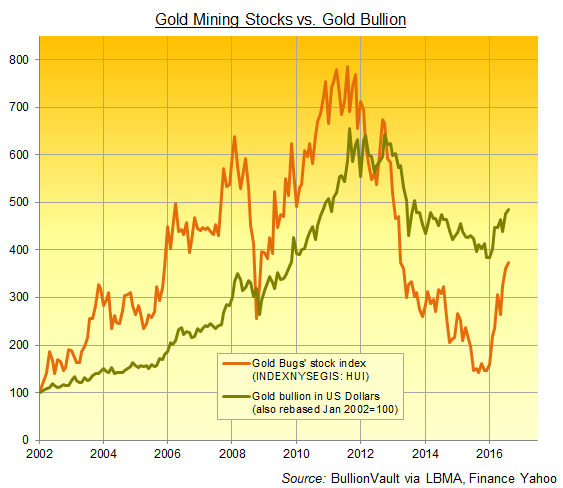 With gold prices rising sharply from end-2015's new 6-year lows, "over the first quarter of 2016, the delta-adjusted global producer hedge book rose 23%," says the latest analysis of miner price hedging from Thomson Reuters GFMS.
Rising for a third consecutive quarter, that took the total amount of future production already sold at fixed prices "to its highest level since Q2 2010 [at] 270 tonnes" says GFMS – equivalent to some 8% of 2015's record-high global mine output on BullionVault's math.
Peaking when gold prices bottomed in 2001, the global gold-mining industry's hedge-book sold forward some 3,100 tonnes, equal to 125% of that year's then record-high output.
The industry then slashed its hedge-book, buying back contracts to sell future production for price protection at ever-higher costs in the market, and culminating with No.1 miner Barrick (NYSE:ABX) eliminating the last of its hedges in 2009 at prices 250% higher from a decade before.
"The locking-in of prices over extended time periods was a prominent criticism (among many) levelled at the hedging practices of the 1990s and early 2000s," writes GFMS director William Tankard and analyst Dante Aranda in the latest Alchemist magazine for members of the London Bullion Market Association.
Back then, "substantial contango was used to generate meaningful forward premia" as sale prices for future delivery were well above market values.
But now, "with cash deposit rates remaining close to zero in most major currencies, the premium available in the gold forward price is now a fraction of pre-financial crisis levels."
Together with shareholders' prior criticism of hedging, and the losses it generated when unwound during gold's 2001-2011 bull market, "hedges maturing over short timeframes now appear to be very much the norm."