END_OF_DOCUMENT_TOKEN_TO_BE_REPLACED

GOLD MARKET prices recovered an overnight 1.1% loss in London's wholesale bullion trade Tuesday, rising back to last weekend's level for US and Euro investors as Western stock markets slipped from a 1-week high and government bond prices rose amid worsening trade tensions between the US and China, the world's 2 largest economies.
Silver tracked gold's recovery, rising back to $17.56 per ounce, while platinum prices rose 0.8% for the week so far at $887.
Other commodities fell however, with European benchmark crude oil Brent falling over $1 per barrel towards 2-month lows
Longer-term interest rates also retreated as bond prices rose, erasing Monday's rise in 10-year US Treasury yields to 1.56% per year – badly lagging US inflation, last reported at 2.4% on the 'core' cost of living index stripping out food and fuel.
Thursday will bring the Bureau of Labor Statistics' inflation estimate for September. 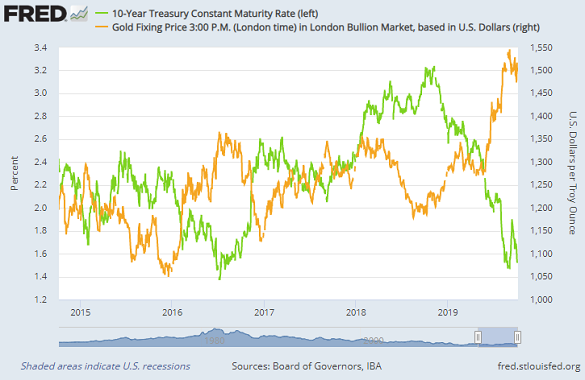 Shanghai's gold market re-opened Tuesday after China's Golden Week holidays marked the 70th anniversary of communist rule, showing a $7 per ounce premium to London quotes – some $2 below the typical level and the lowest incentive for new imports into gold's No.1 consumer nation since May.
Despite evidence of a slow-down at home, China's leading mobile payments platform Alipay says the week-long break saw Chinese citizens holidaying abroad spend 15% more on average than during Golden Week 2018, reaching some $351 per person.
Chinese vice-premier Liu He will arrive in Washington for Thursday's key US-China trade talks without instructions for a deal from President Xi Jinping, the South China Morning Post reports, because he won't carry the title of "special envoy".
US commerce secretary Wilbur Ross on Monday blocked 8 Chinese companies and 20 government entities from buying US-made tech equipment without a special licence, targeting them for human rights abuses against Uighur Muslims in China's Xinjiang province.
UK Prime Minister Boris Johnson's 'final' Brexit proposal to the European Union was meantime rejected today in a call with Germany's Chancellor Angela Merkel, the BBC said, quoting an unnamed No.10 'source' – possibly the same 'source' who yesterday told reporters that any EU members agreeing to extend the UK's membership beyond the Halloween deadline will "face...inevitable consequences" in future talks with London.

Sterling fell towards 1-month lows versus the Dollar on the currency market, down more than 3.5 cents from late-September's highs.
With Dollar gold prices touching $1505 and Euro gold reaching €1370, that helped the UK gold price in Pounds per ounce rise to its highest in 2 weeks above £1232.
Gold-backed ETF investment funds worldwide grew in September to need a new record quantity of bullion, the mining-industry's  World Gold Council said Tuesday, finally surpassing late-2012 levels on a surge in US investor interest.
Gold demand in No.2 consumer-market India, in contrast, is set for a very poor Diwali festive season, LiveMint reports, with dealers expecting sales to fall in half from 2018 on the metal's high Rupee prices and additional import duty further raising bullion costs.