END_OF_DOCUMENT_TOKEN_TO_BE_REPLACED

DOLLAR GOLD PRICES came within $2.25 of $1300 per ounce in London on Wednesday morning, rallying even as the US currency rebounded on the FX market ahead of today's release of notes from the Federal Reserve's latest meeting on interest-rate policy.
That helped drive Euro gold prices back up towards early May's 8-month highs at €1110 per ounce as Italy's government bond prices meantime fell hard yet again amid fresh concerns over the incoming government's deficit spending plans.
The yield offered by Italian bonds rose further above interest rates on other Eurozone sovereign debt, reaching the widest spread since June 2017, as President Mattarella summoned Giuseppe Conte – a little-known lawyer now being challenged over claims on his resumé – to the Quirinal Palace, most likely to appoint him as Prime Minister.
So-called "miniBOT" bonds, proposed by members of Italy's new left-leaning Five-Star and right-wing League coalition, potentially breach European Union rules over government spending deficits, and also risk breaching Eurozone rules by creating a parallel currency.
"We do not interfere with domestic politics," said European Union vice-president Valdis Dombrovskis today.
"For now we can only say that it is also important for the new executive to keep the course of responsible fiscal and macroeconomic policies."
Gold priced in Chinese Yuan meantime ended Wednesday in Shanghai unchanged on the day, cutting the premium for bullion delivered there rather than London below $6 per ounce for the first time in 5 weeks thanks to the US Dollar's rebound on the FX market.
Rising against all currencies except the Swiss Franc and Japanese Yen on Wednesday, the US Dollar has now risen 8% against the Indian Rupee so far in 2018, helping boost gold prices and dent demand among private households in the No.2 consumer nation.
After accounting for India's 10% bullion import duty, wholesale gold prices in India's shipping hub of Ahmedabad have fallen below comparable London quotes according to futures exchange NCDEX, nearing the steepest discount since New Year at $2 per ounce. 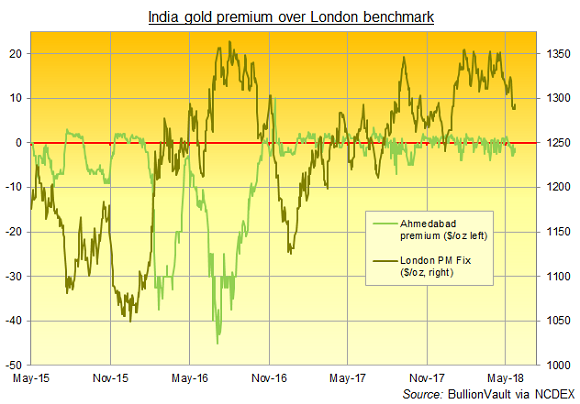 Already 22% higher for 2018 to date, gold priced in Lira rose Wednesday to fresh record highs as the Turkish currency sank once more ahead of next month's snap election, called by President Erdogan after a referendum gave him greater direct powers and control.
"Erdogan is getting his market education and fast," tweeted one London-based economist today, referring to the Turkish president's repeated claims that raising interest rates would only worsen inflation, rather than helping support the currency.
"The time for the CBRT action is now or this will set Turkey back 20 years in terms of the economy."
Turkey's main stock exchange, Borsa Istanbul, meantime converted all of its cash assets into Turkish Lira from other currencies "in order to show our confidence" in the Lira which – it said in a statement – has suffered "harsh speculative moves".
Turkish equities today fell 1.2%, matching the drop in global stock markets.
Crude oil meantime eased back for only the fifth day from 16 sessions so far in May, pulling Europe's Brent benchmark back towards $79 per barrel.
The UK gold price in Pounds per ounce held around £970, a four-month high when reached early in May.