END_OF_DOCUMENT_TOKEN_TO_BE_REPLACED

GOLD INVESTING prices twice jumped to $1270 per ounce on Friday, first as the US military bombed Assad-regime facilities in Syria after this week's chemical weapons attack on Idlib, and then as US jobs data said the world's largest economy added just 98,000 jobs in March.
That saw the gold price for US investors touch its highest level since the day of Donald  Trump's victory in the White House election last November.
Both times, wholesale gold investing bars then retreated to $1264 per ounce – the late-February peak now called "key resistance" by several price-chart analysts.
Way below economists' forecasts of 180,000 non-farm payrolls growth for last month, the Bureau of Labor Statistics' first estimate was barely half the average March addition of the last 7 years, since the global financial crisis of 2008-2009.
The jobless rate fell however to 4.5% last month, the lowest level since the US housing slowdown began hitting hedge funds betting on subprime mortgage investment bonds in May 2007.
Investing in gold futures and options had already spiked the price up to $1269 per ounce overnight, adding nearly $20 per ounce inside 1 hour of the US airstrikes in Syria, authorised by the new US President's sudden U-turn against the Assad regime.
Chinese gold prices extended their premium over London bullion quotes to $12.75 per ounce at Shanghai's afternoon 'fixing' benchmark, offering the strongest incentive this week to new imports into the world No.1 consumer nation. 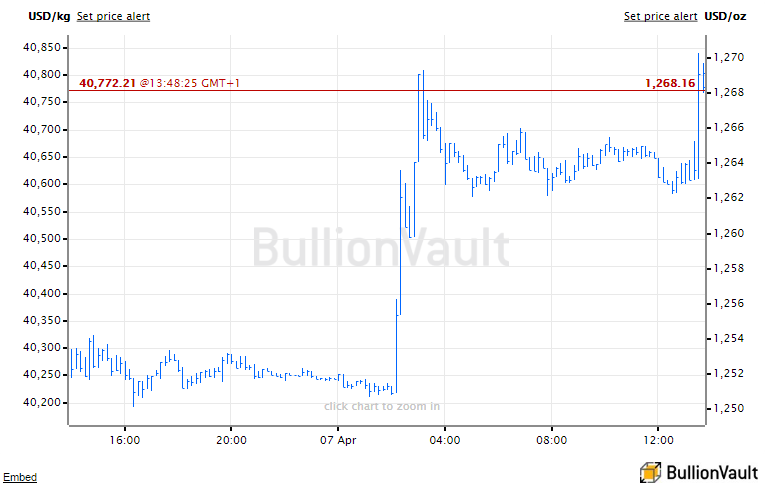 "The 200-day Moving Average at $1259 has proved significant resistance for gold," said a technical analysis from French investment bank Societe Generale yesterday, also highlighting the multi-month peak of 6 weeks ago, some $5 above there.
Looking back to that late-February high, "The formation of a Double Top on hourly charts further gives evidence [that] $1259/1264 remains a key level," the note said.
Friday in Moscow, "Putin [says] this kills US-Russian relations," said Moscow's state-run Pravda news agency, reporting the suspension of Russia's "deconfliction" agreement with the US to avoid mid-air collisions and conflict in their separate efforts to destroy the ISIS group in Syria.
"Undoubtedly," added Russia's Foreign Ministry, "the US military action is an attempt to distract attention from...actions conducted by the US-led coalition [in which] hundreds of civilians have been killed and a humanitarian catastrophe has been gathering pace."
In London, "Where will it all end?" asked former UKIP leader and Brexit victor Nigel Farage – now a radio talk-show host in London, rather than UK ambassador to Washington as Trump had suggested – saying that "Whatever Assad's sins, he is secular," as opposed to religious-inspired terrorists.
Welcoming the US action after this week's Sarin gas attack on civilians in Syria's opposition-held city of Idlib, foreign minister Mevlut Cavusoglu of neighboring Turkey – formerly the world No.4 gold buying nation, now down to 6th – meantime said he "[won't be] diplomatic at all" in telling the United States it needs to stop supporting Kurdish separatists the YPG, also now fighting ISIS in the Syrian conflict.
Even with Russia and the US split, "You've got two superpowers competing over a terrorist organization," Cavusoglu said.
"If our allies leave us alone in the fight against [Kurdish] terrorism...we'll continue on our own."
Following last year's failed coup attempt in Ankara, Turkey on April 16 will hold a controversial referendum on giving President Erdogan sweeping new powers.
Opinion polls currently show a 53.3% vote for 'No' nationwide, but 'Yes' rises to 70% in Erdogan's key support-base region of Central Anatolia.