END_OF_DOCUMENT_TOKEN_TO_BE_REPLACED

GOLD BULLION crept higher against a falling US Dollar in London trade Thursday, edging up to new highs for this week at $1207 per ounce but flirting with new multi-year lows in terms of other major currencies.
The UK gold price in Pounds per ounce fell within £6 of its post-Brexit referendum low, briefly dipping below £908 as European Union leaders meeting in Salzburg, Austria called on British prime minister Theresa May to re-run the 2016 vote and warned that " time is running out" to avoid a "no-deal Brexit" next March.
Brent crude oil meantime dipped away from a 4-year high of $80 per barrel for the fourth time in 4 months after US president Donald Trump called on Saudi Arabia and other Opec oil-cartel nations to boost output.

We protect the countries of the Middle East, they would not be safe for very long without us, and yet they continue to push for higher and higher oil prices! We will remember. The OPEC monopoly must get prices down now!

Most Asian and European stock markets rose, but Shanghai ended flat – snapping a 3-day rally from multi-year lows – after the South China Morning Post reported that Beijing has ordered mainland stock brokers and other financial institutions "to avoid making public comments that lack professional prudence.
"[Such comments] have...caused a disorder in the market with huge negative impact."
This "censorship memo" from the China Securities Regulatory Commission (CSRC) "will not effectively stem the slide" to 2015 lows, the SCMP quotes Shanghai hedge-fund manager Shen Ye, because "worries about slowing economic growth and trade war will cause damages to business operations."
Denying rumors that Beijing wants a weaker currency to offset US president Donald Trump's new trade tariffs, "China will never go down the path of stimulating exports by devaluing its currency," said Prime Minister Li Keqiang at a conference in Tianjin yesterday.
"The persistent depreciation of the Renminbi will do more harm than good to our country."
The No.1 gold consumer nation, China has seen its currency – also known as the Yuan – fall more than 8% against the US Dollar over the last 6 months.
Gold bullion has dropped nearly 10% in USD terms over that time. 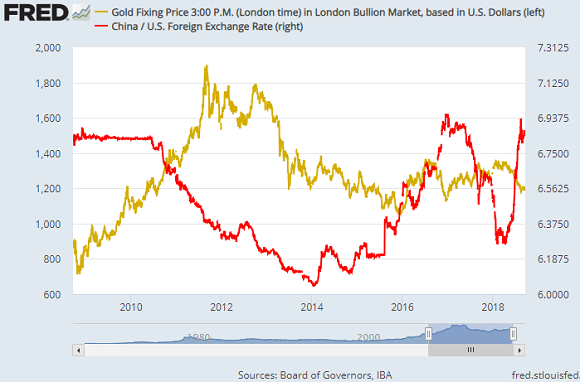 "Gold continued to grind higher in Asia today," says a trading note from Swiss refiners and finance group MKS Pamp, calling business "fairly uneventful...despite some decent volume going through."
No.2 gold bullion consumer nation India is meantime set to defy US sanctions and continue buying crude oil from Iran after November, paying with its own Rupee rather than Dollars according to sources quoted by Reuters.
New Delhi's financial regulator SEBI says it will allow foreign investors to trade India's derivatives markets, "a big step in deepening liquidity and in the long run actually helping India become a global price-setter," according to Mrugank Paranjape, CEO of the Multi Commodity Exchange.
The mining-backed World Gold Council is meantime set to release a "blueprint" for launching a centralized physical gold bullion exchange, its managing director Somasundaram PR said today.
Like China, India currently bans the export of gold bullion, forcing domestic prices to reflect local supply and demand at a premium or discount to global wholesale quotes.
Iran itself is re-opening the import of gold bullion, as well as foreign currency, ahead of the United States' November deadline blocking other nations from trading with the world's No.4 oil producer.
Across the border in Turkey, "There is no crisis, do not be fooled by that. These are all manipulations," said President Recep Tayyip Erdoğan on Wednesday, blaming the Lira's 40% plunge in 2018 to new all-time lows on outside forces.
Consumer confidence in Turkey – the No.5 gold consumer nation – fell this month to a 3-year low, dropping over 13% on the Turkish Statistics Institute's index.
Vowing to create 2 million new jobs by 2021, Finance Minister Berat Albayrak today said inflation will slow from 21% this year to 16% in 2019 and then below 10% in 2020 as part of Ankara's new Medium-Term Economic Program.
The Turkish central bank's gold holdings have dropped by one fifth since mid-June thanks to commercial banks – allowed to register customer gold deposits as part of their required reserves since 2011 – selling some $4.5bn of the metal to raise cash amid the Lira crisis.