END_OF_DOCUMENT_TOKEN_TO_BE_REPLACED

GOLD's Brexit jump to fresh multi-year highs against all major currencies bar the Japanese Yen faded London lunchtime on Friday, but prices held firm as US stockmarkets prepared to open the day sharply lower amid the global rout in risk assets.
London's FTSE share index rallied to a 4.7% loss thanks to mining stocks, but German and French stock markets stood some 8% lower as the afternoon began.
As crude oil and other commodities also fell, surging bond prices meantime drove German Bund yields down to new record negative levels at -0.08% on Berlin's 10-year debt.
Ten-year US Treasury yields sank one-fifth of one percent to new 4-year lows at 1.54%.
Gold priced in Dollars held above last Thursday's spike to 2-year highs at $1315 per ounce, some 3% below its $100 spike overnight.
Silver had lagged the jump, adding 20% to its 2.5-year peak of $18.32 against gold's 22% move in the Dollar.
Gold priced in the single Euro currency meantime held at 3-year highs of €1200 per ounce. 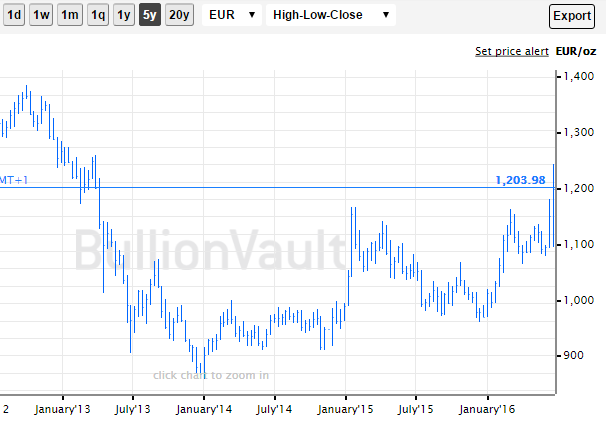 The 3 presidents of the European Council, Commission and Parliament, plus the Union's current president, today called for the UK to trigger Article 50 of the Lisbon Treaty and formally announce its withdrawal " as soon as possible, however painful that process may be [with] no renegotiation [rather than] unnecessarily prolong uncertainty."
UK Independence Party leader Nigel Farage said he expected the Netherlands, Austria and other EU members to seek an exit too.
"We [also] want be in charge of our own country, our own money, our own borders, and our own immigration policy," said Dutch anti-immigration MP Geert Wilders.
Thursday's Brexit vote led this morning to the resignation of UK prime minister David Cameron, plus calls for another referendum on Scottish independence, as well as a vote of no confidence in UK opposition party Labour's leader Jeremy Corbyn, who also backed Remain.
"Britain has rarely looked more divided or ill at ease with itself," said an editorial in a special Financial Times' lunchtime edition.
UK voters backed Brexit by 52% to 48% on a turnout just above 3-in-4.
After gold priced in Sterling dropped 10% Thursday from last week's spike to 3-year highs, British Pound bullion prices leapt 22% overnight – their fastest gain in recorded trading – to touch £1019 per ounce.
"We need to be prepared for the potential for a greater level of volatility in financial markets than we have seen since the end of the financial crisis of 2008-2009," said UK fund manager Edward Bonham Carter of the giant Jupiter group.
After the Bank of England offered £250 billion ($340bn) in immediate liquidity support to UK banks and markets, the Swiss National Bank confirmed it had "intervened" in the currency market overnight to try and suppress the Franc by selling it.
Gold prices in Swiss Franc terms leapt to new 3-year highs overnight.