END_OF_DOCUMENT_TOKEN_TO_BE_REPLACED

GOLD BARS traded in London's wholesale market held at $1500 per ounce for the 4th session running on Friday, heading for their first weekly gain in four as crude oil pushed higher but world stock markets struggled.
Still refusing to confirm or deny plans to strike Iran following last weekend's attacks on US ally Saudi Arabia's key oil facilities, Washington on Friday admitted to yesterday's drone attack in Afghanistan where 30 farmers were killed – "collateral damage" according to a spokesman in what was intended as an attack on ISIS terrorists.
With 'climate strike' protests being held across the world on Friday, crude oil prices edged above $58.50 per barrel of US benchmark WTI, more than 6.7% higher for the week but still halving  Monday's historic spike.
"Any negotiations with Iran are doomed to failure," said US President Donald Trump's former advisor John Bolton at a private event this week, blaming the President's failure to attack Tehran sooner for inviting the Islamic Republic's latest aggression.
Uncertainty over the Saudi attacks and the likely US response "are keeping gold's safe-haven bid intact," says Reuters, quoting Indian brokerage SMC Comtrade's analyst Vandana Bharti.
"Gold's drivers remain [both] financial and geopolitical risk," writes Rhona O'Connell, head of market analysis outside the Americas for US-based brokerage INTL FCStone.
Friday saw the New York branch of the US Federal Reserve offer $75bn in 1-day loans for the 4th day running, trying to ease market interest rates back down to the Fed's new lower target of 1.75% following this week's widely-expected policy cut.
US and other major government bond yields edged lower, trading little changed on 10-year US Treasury debt at 1.78% per annum.
That's still sharply above early September's 3-year lows of 1.47%. 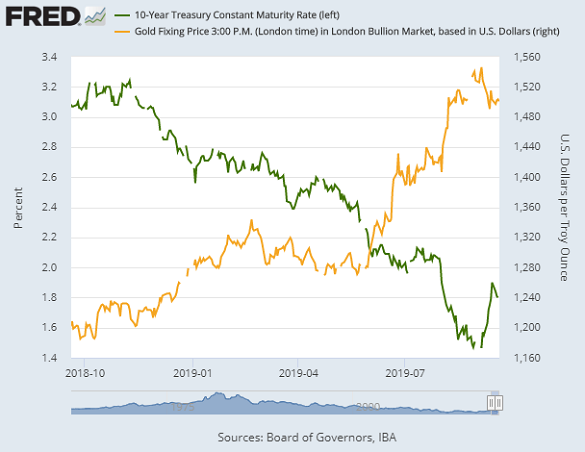 "We noted last week that there were sporadic pockets of gold buying interest," O'Connell at INTL goes on.
"These seem to be spreading, although it is by no means a headlong rush."
While the giant SPDR Gold Trust (NYSEArca: GLD) saw no change in investor holdings on Thursday, the No.2 gold ETF – the iShares IAU product – expanded by 0.4%.
Reaching a new record size of shares in issue, that meant the IAU needed 334 tonnes of gold bullion bars to back its value, nearly two-fifths the size of the GLD.
Wholesale gold bars in China today slipped beneath a $9 premium per ounce versus London quotes, below the average incentive for new imports to the metal's No.1 consumer nation and sharply down from August's 6-year highs.
India's Economic Times today reports that machines for faking brand stamps from the leading small bar manufacturers in Switzerland have been found in Mumbai's Zaveri Bazaar
"Fake bars have impurities embedded in them and are sold at rates for genuine bars," says ET, "causing huge losses to genuine manufacturers."
With the gold price in Dollars adding 0.8% from last Friday, the Euro price of large gold bars showed a 1.1% rise for the week, edging up to €1360 per ounce – a new all-time record when first reached 5 weeks ago.
The  UK gold price in Pounds per ounce also headed for a small weekly gain, trading £10 above last Friday's 1-month low of £1190 as Sterling slipped lower on the currency market.
Breaking 2-month highs against the Dollar on Thursday after the European Commission's Jean-Claude Juncker repeated that he is  not "emotionally attached" to the Irish backstop clause of the UK's Brexit withdrawal agreement, the Pound today lost half-a-cent to hold 1.5% lower for 2019 so far.
The gold price in Sterling has meantime risen £200 per ounce since New Year's Eve, setting a run of fresh all-time records to £1282 in August.
Back in the oil market, Saudi Arabia's royal regime is "bullying" wealthy families "to pump cash" into the partial stock-market flotation of oil giant Aramco, claims the Financial Times today, set to raise perhaps $100 billion – four times the world's previous largest-ever IPO.