END_OF_DOCUMENT_TOKEN_TO_BE_REPLACED

GOLD PRICES held flat in London trade Friday, keeping a 0.9% gain for the week against a rallying US Dollar but staying almost $25 per ounce below yesterday's sudden spike to 1-months highs at $1270.
European stock markets slipped again as Euro gold prices added 1.1% for the week.
Commodity prices meantime stalled at Thursday's near 5-month highs on the Reuters-Jefferies CRB index, holding some 12% higher from February's 14-year lows.
Silver held over $1 higher for the week, setting a benchmark price at midday in London of $17.19 per ounce.
The highest LBMA Silver Price since May last year, that marked a 6.7% weekly rise – the second strongest gain of the last 12 months. 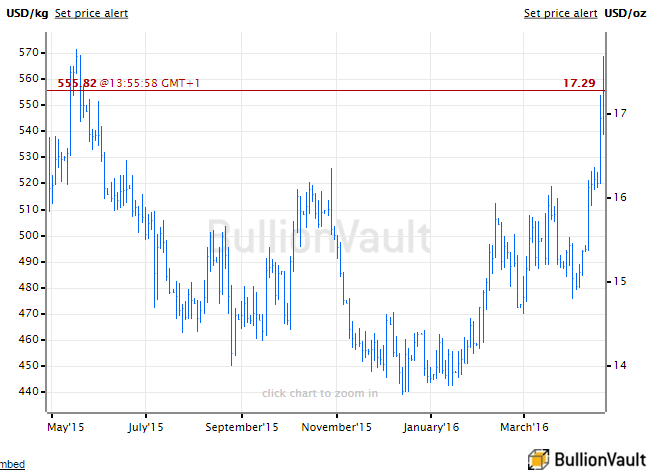 "As demand fears have faded and supply reductions bring key [commodity] markets closer to balance, we believe that the lows of first quarter are likely behind us, particularly in oil," says US investment bank Goldman Sachs' natural resources team, switching to "neutral" from "bearish" on the sector.
"[But] gold has very limited near-term upside...reflecting a limited ability of the Fed to surprise on the dovish side...and given very high levels of gold net speculative positioning and ETF holdings."
US central bank the Federal Reserve will announce its latest policy decision on Wednesday next week.
Current betting in the US futures market today put the odds of any rise from the current 0.5% interest rate at less than 1-in-28.
Fixing meantime in Shanghai at a Yuan price of CNY 260.41 per gram on Friday, China's new gold benchmark ended the week some 80 cents above equivalent international quotes, trading at a mid-price of $1247.40 per ounce as London opened for business.
"It will be some time before 'Shanghai Gold' can truly challenge the dominance of its international counterparts," says today's Shanghai Daily newspaper, republishing a story from state news agency Xinhua.
Wholesale trade body the London Bullion Market Association this week told its members that they will be voting at a general meeting on 29 June on changes to its governance structure and remit, possibly to include platinum as well as gold and silver trading.
"The LBMA is considering broad changes to the way gold is traded in London," says Bloomberg, "including transaction reporting and a new trade platform."
"Gold demand has clearly shifted somewhat from East to West again," says German financial services group Commerzbank in a commodities note, commenting on yesterday's Swiss trade data, which showed the key refining center importing some 50 tonnes of metal last month back from Dubai – more typically a destination for exports.
Also looking at Western demand, "The gold rally is most under threat from the resurgence in investor risk appetite," say analysts at international bank and London bullion clearing member HSBC.
"The move in stocks to fresh 2016 highs, if the run continues, may rob gold of some of the oxygen it needs to continue to rally."