END_OF_DOCUMENT_TOKEN_TO_BE_REPLACED

GOLD TRADING recovered a $5 per ounce drop in London trade lunchtime Wednesday, with bullion standing at $1255 as Western stock markets rose again ahead of tomorrow's negative-interest rate and QE decision from the European Central Bank.
Brent crude oil crept back above $40 per barrel for the first time in 3 months, but iron ore dumped half of Monday's record 19% one-day jump.
Despite expectations that the ECB will extend NIRP still further on Thursday, government bond prices fell across the board, pushing 10-year German Bund yields higher from last week's 10-month low beneath 0.11%.
The Euro slipped below $1.10, keeping the gold price for single-currency investors trading in line with last week's finish at €1144 per ounce – a 13-month high when first reached in February.
Bullion priced in Dollars held 2% below last week's 13-month high near $1280.
"Gold has finally succumbed to some profit-taking," says a trading note from London brokers Marex Spectron.
"The trend of the first couple of months seems to be over."
After gold trading "pierced through the multi-year [down] channel at $1264, a monthly close above this [level] will be of prime importance," says a technical analysis from French investment bank and bullion market maker Societe Generale, calling Friday's peak of $1280 and then Monday's $1277 "a probable double top" – classically a bearish pattern, which a "move below $1245 will confirm."
But after gold's underlying price direction saw a "golden cross" on analysts' charts at the end of February, inviting momentum traders to buy the uptrend, the metal's 50-day moving average "has [now] crossed the 100- and 200-day MA from below," notes Canadian bank and London market-maker Scotia Mocatta, "and the 100-day MA is set to pierce the 200-day MA as well."
On gold's global benchmark, the 3pm LBMA price set by auction between the largest bullion traders, the 50-day average rose above both the 100- and 200-day averages at the end of February 2016 – a position seen briefly in the spring and then late-summer of 2014.
For a decade starting June 2001, gold's 50-day moving average held above the 100-DMA and 200-DMA on 73% of all trading sessions.
The 100-DMA only lagged the 200-DMA on 306 of the 2,704 trading days starting July 2001. 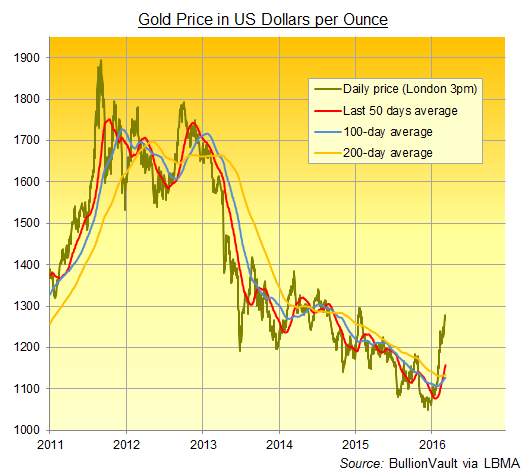 "We think the [moving averages] should gradually catch up to the current price level and lend some support," says Scotia.
Gold trading on Shanghai's government-approved bourse meantime held firm Wednesday at almost twice average levels, but it still shrank to only half of Monday's new record, when 87 tonnes-worth of the main Au(T+D) contract changed hands.
Compared to the world benchmark of London settlement, Shanghai gold prices today rose to a premium of $2.50 per ounce – back in line with the average incentive offered to new imports – as the Yuan reached a 3-week high versus the Dollar on the FX market.