END_OF_DOCUMENT_TOKEN_TO_BE_REPLACED

GOLD PRICES edged back from 2-week highs versus a rallying US Dollar in London trade Thursday, retreating as silver extended its jump despite weak Asian data sparking fears of a global economic recession.
After the pace of US house-building showed a steep decline for June, new figures from Japan today said the world's third largest economy saw its exports sink by 4.7% over the first half of 2019, led by a plunge in demand from Asian neighbors amid the US-China trade war.
Neighboring South Korea then shocked currency traders by cutting its key interest rate for the 1st time in 3 years, citing "[the] monetary policies of major countries...geopolitical risks...domestic growth and [weak] inflation."
Exports from Singapore meantime showed their 4th month of double-digit annual declines, with overseas sales falling 17.3% in June.
Singapore's GDP is expected to show "tepid" economic growth of just 0.1% for the April to June quarter.
Despite finding three-fifths of its annual demand from industrial uses however, silver today hit 5-month price highs above $16.10 per ounce, jumping 5.9% for the week so far.
That slashed the Gold/Silver Ratio of the two metals' relative pricing down to barely 88.1 – the lowest in nearly 2 months and sharply below this summer's 26-year highs above 93.
Platinum prices also beat gold's gains, showing a 2.3% rise from last Friday's finish.
Historically the Gold/Silver Ratio has averaged 56 over the last 50 years. 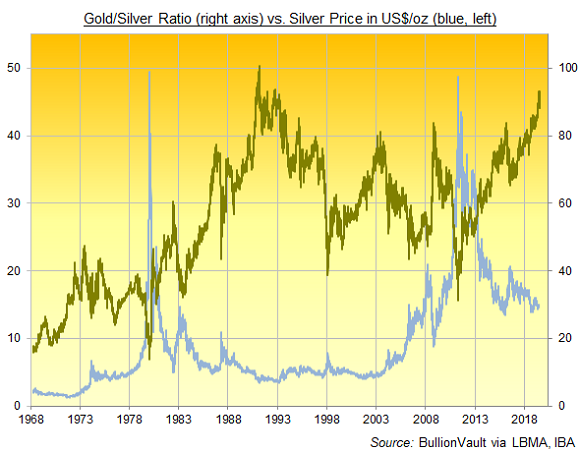 The gold price in Euro terms meantime hit a new 6.5-year high at €1272 per ounce at the start of Asian trade overnight, retreating €5 by lunchtime in London.
For UK investors the gold price in British Pounds per ounce touched a new 8-year high at £1148 after the ruling Conservative Party's final leadership debate saw likely prime minister Boris Johnson wave a packet of smoked fish in the air and blame European Union rules for putting unnecessary costs on their Isle of Man producer.
"We will bring the 'Kippers back. It's not a red herring," joked Johnson, referring to former UKIP leader Nigel Farage's Brexit Party taking votes from the Conservatives for failing to deliver Brexit.
"The Isle of Man is not, and never has been...part of the European Union," explains the Crown Dependency's official website. The relevant rules in fact fall under "national competence" and are imposed by the UK, not the EU according to the right-wing Telegraph newspaper, for which Johnson writes a weekly column.
Since falling last October to the cheapest level since the eve of the 2016 Brexit referendum, in which Johnson led the victorious 'Leave' campaign, gold priced in British Pounds has now risen 27.8%.
That compares with a 19.7% rise in US Dollar terms and a 23.1% rise for gold in Euros.
Brexit uncertainty and falling economic confidence "together [may] push the [UK] economy into recession," says the latest Fiscal Risks Report from the government's Office for Budget Responsibility, "with asset prices and the Pound falling sharply" if the UK quits the EU with 'no deal' in place on the current deadline of 31 October.
"Real GDP falls by 2% by the end of 2020 and is 4% below our March forecast by that point."
Johnson said last night his first job as Prime Minister "will be to launch a huge no deal public information campaign to help minimise any possible disruption."
MPs will today vote on the 'Benn amendment', aimed at blocking the Government from proroguing Parliament to prevent politicians from stopping a no deal Brexit.