END_OF_DOCUMENT_TOKEN_TO_BE_REPLACED

GOLD PRICES fell against a rising US Dollar on Thursday but erased this week's earlier 0.7% loss versus the Euro currency as the European Central Bank unveiled a smaller than expected "taper" of its quantitative easing program.
Vowing to keep its zero and negative interest-rate policy unchanged "for an extended period [and] well past the horizon" of QE asset purchases, the ECB said it will halve the monthly volume of bond buying to €30 billion from January.
Continuing to buy until at least September 2018, the Eurozone's chief central bank will then maintain its holdings of government and other debt by "reinvest[ing] the principal payments from maturing securities...for an extended period of time after the end of its net asset purchases."
The Euro lost almost 1 cent versus the Dollar on the FX market, buoying the gold price for German, French and Italian investors back above €1085 per ounce.
Gold prices for US investors fell 0.5% for the week so far in contrast, trading back down to $1275.
Major government bond yields retreated across the board from this week's multi-month highs, with German 10-year Bunds now offering 0.45% and benchmark US T-bonds offering 2.42% per annum – unchanged from the start of 2017 but now just ahead of US inflation on a slowdown in the cost of living.
UK Gilt yields also fell after new private-sector data showed the hardest drop in retail sales since the depths of the global financial crisis in March 2009 after official inflation rates showed a 5-year high.
Spain's main share index meantime jumped 2.0% while broader Eurozone equities gained 0.5% after news broke that Catalan leader Carles Puigdemont will call local elections – apparently set for 20 December – to meet the national government's demands for not imposing direct rule following this month's unofficial referendum on independence.
" 155 silver coins," tweeted one pro-independence Catalan politician, referring to the Article 155 rule enabling Madrid to quash regional autonomy and to the 30 silver coins paid to Judas Iscariot for betraying Jesus of Nazareth.
Separate data released by the ECB shortly before Thursday's policy decision showed annual money-supply growth in the 19-nation Euro currency union ticking up to 5.1% in September.
But while growth in borrowing by Eurozone governments rose 8.4%, new borrowing by households grew only 2.7% with private non-financial companies borrowing only 2.5% more from the same month last year. 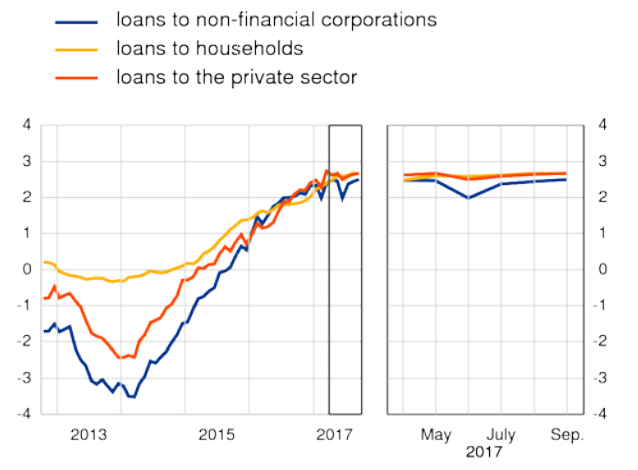 "Many major Western central banks are now looking to tighten policy in the coming months," said Ross Strachan, manager of Metals Demand Europe for specialist analysts Thomson Reuters GFMS, launching the consultancy's Q3 gold update this morning.
"Because the consensus on this is so widespread however, I'd strike a note of caution on how this will affect gold prices. The US Fed's December rate rise for example is, I'd suggest, already factored into the market. Central banks stand a strong chance of surprising the market if [next year's] tightening isn't as swift as expected."
Other risks exist to GFMS' outlook for 2018, Strachan went on, pointing to the possibility for further record highs in world stock markets and what looks to be "a synchronized global economic upturn".
But with investors increasingly anxious about a sharp correction or crash in global equities, next year will see an average gold price of $1360 per ounce – almost 9% ahead of 2017 to date – with a peak above $1400 on GFMS' new analysis.