END_OF_DOCUMENT_TOKEN_TO_BE_REPLACED

GOLD PRICES held firm in a tight range Monday in London, trading above $1095 per ounce – and reclaiming €1000 for Euro investors – as commodities rallied but government bond prices fell, nudging yields higher, on new comments about a September rate hike from the US Federal Reserve.
Ten-year US Treasury yields hit 2.21% but held one-fifth of a per cent lower from 1 month ago after Fed vice-chairman Stanley Fischer claimed "a large part of the current [low] inflation is temporary."
"It has to do with the decline in the price of oil [and] raw materials," Fischer told Bloomberg TV.
Bond investors, however, are "bet[ting] on decades of low growth and inflation" to come, says the Financial Times, reporting Dealogic's estimate of a record $253 billion of long-dated debt – maturing in 3 decades or more – sold by governments and private companies worldwide so far this year.
Trading just shy of $1100 per ounce, the gold price "has managed to defy [Friday's] sound US labour-market figures," says German bank Commerzbank, even though those data "make a Fed rate hike in September more likely.
"Once the uncertainty about the Fed's course starts to fade, the price of gold should rise."
Short-covering by bearish traders in US gold futures and options "should eventually lead to gold back above $1100," says Swiss bank and London bullion market maker UBS today.
Hedge funds and other speculative traders last week trimmed their bearish bets faster than their bullish contracts as a group, but retained a net bearish position overall for the third week running.
So-called 'non-reportable' traders meantime held a larger net bearish position according to data gathered by US regulator the CFTC, with those smaller, often private individual traders holding their biggest balance of short over long contracts since records began 20 years ago. 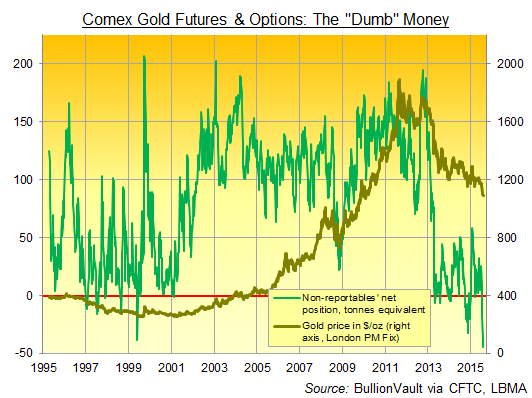 "In spite of relatively disappointing response from physical markets thus far," UBS goes on, pointing to gold's major consumer markets in Asia, "we expect an improvement in this market segment and lead a recovery further out, especially as seasonality kicks in."
Even during the usually quiet summer months for Middle Eastern gold demand, "As prices are dipping, we are witnessing a huge rush in our showrooms," the Times of Oman quotes one regional retailer.
"Since the last week of June, we have witnessed a sudden jump in the demand for gold jewellery," adds Mumbai-based gold retailer Dinesh Jain, managing director of P.M.Shah Jewellers, speaking to the Asian Age and reporting a 50% increase in July's demand from the same month in 2014.
"Jewellers have increased buying for the peak festive season, replenishing inventory," adds a senior trader at Edelweiss Metals Ltd in Mumbai.
Gold's price drop to new 5-year lows in July may have spurred 80 tonnes of bullion imports to India – the world's No.1 gold consumer nation in Q2 – according to some local reports, twice the expected level.
"It seems to differ depending on who you talk to," one India dealer says, "but one thing is for sure – there is a lot of material around."