END_OF_DOCUMENT_TOKEN_TO_BE_REPLACED

GOLD PRICES extended their hard drop on Monday following Friday's strong US jobs data, while global stock markets rose with commodities, writes Steffen Grosshauser at BullionVault.
Gold traded between $1330 and $1338 per ounce after experiencing its worst drop in 4 months on Friday's better-than-expected US payrolls report.
Expectations of faster economic growth today saw traders raise their outlook for a Federal Reserve rate hike by December to 43%, up from 31% before Friday's jobs data release according to betting in the futures market.
"We may be seeing a turning point setting in for both gold and silver, as the impact of the non-farm payroll number cannot be dismissed," brokerage INTL FCStone's analyst Edward Meir said in a note.
"Precious metals could remain under selling pressure" thanks to the jobs report, agrees specialist news provider FastMarkets' analyst Boris Mikanikrezai.
"Still, it seems too early to assert that a negative swing in sentiment has emerged in precious metals."
"Gold prices have fully digested the nonfarm payrolls data," counters Oversea-Chinese Banking Corp's economist Barnabas Gan.
"US economic fundamentals have picked up, but the downside risks from whatever is happening from the [UK's referendum result on] Brexit is still unknown."
In other precious metals, silver was little changed from last week's close at $19.73 per ounce, falling 0.3% to a near 2-week low.
Nearby silver price support stands at $19.50, according to a technical analysis from Swiss refiner MKS Pamp's trading desk.
New data released after Friday's close showed private investors and other 'small speculators' trading Comex silver futures and options growing their bullish bets to the largest level – net of bearish contracts – since February 2013 ahead of last week's US jobs data. 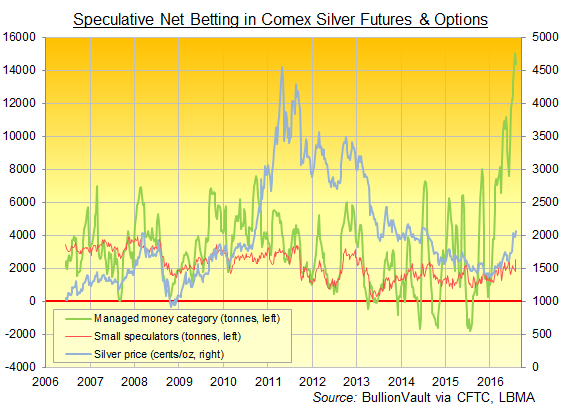 The 'Managed Money' category of Comex derivatives traders trimmed their net bullish betting on silver prices from end-July's new record high.
Gold positioning, in contrast, rose across both professional and private speculators according to US regulator the CFTC's weekly report.
The People's Bank of China – central bank in the world's biggest gold consumer nation – slowed its pace of gold purchases in July, new data showed today, buying fewer than 6 tonnes as prices rose above 2-year highs following the UK's Brexit referendum result.
Bullion held to back the value of exchange-traded trust funds grew more than that on Friday alone, reaching 2,039.5 tonnes according to Bloomberg, the highest level since July 2013.
The gold ETF market leader SPDR Gold Trust (NYSEArca:GLD) grew 0.7% to 980.34 tonnes.
While China has the world's 5th biggest national gold reserves at 1829 tonnes, its holdings amount to only 2.3% of total reserves, compared to 76% in the US and 70% in Germany, according to data compiled by mining-backed market-development organization the World Gold Council.