END_OF_DOCUMENT_TOKEN_TO_BE_REPLACED

GOLD PRICES pushed up but held below Friday's Brexit jump to new multi-year highs in London trade Monday, as Western stock markets sank once again following the UK referendum's decision to quit the European Union.
Gold on Friday made its highest weekly close in London's wholesale trade since July 2014 against the Dollar, and rose again today despite strong selling pressure at the benchmark LBMA Gold Price auctions.
Prices in Sterling meantime saw a rise back above £1000 per ounce of gold in wholesale trade – a level last seen in spring 2013 – as UK prime minister David Cameron said there will not be a second referendum despite 3.7 million people signing an online petition at Parliament's official website.
Gold priced in Euros touched €1200, a level first seen amid the crisis of summer 2011.
"With strong uncertainty around the stability of Europe, and the the Fed unlikely to raise rates before December, we have revised upwards our forecasts," says Bernard Dahdah at French investment and bullion bank Natixis.
The best forecaster in 2015's professional LBMA competition – picking the annual average gold price down to the dollar at $1160 – Dahdah saw his 2016 highest-price forecast of $1300 per ounce beaten on Friday.
"We now see gold averaging $1275 this year," says Dahdah – some 31% above his previous forecast of $970 – with a "messy divorce between the UK and Europe" perhaps helping the annual average to reach $1400.
"[Alternatively] the negative economic impact on the UK and European economies [may] not really materialize [and] we return to business as usual [with] gold prices averaging $1200 during H2 of this year."
Claiming that Friday's financial turmoil had passed, "Project Fear is over. People's pensions are safe. The markets are stable. The Pound is stable. It's all very good news," said former London mayor, key Brexit campaigner and possible Cameron-replacement in the ruling Conservative Party Boris Johnson in a morning statement. 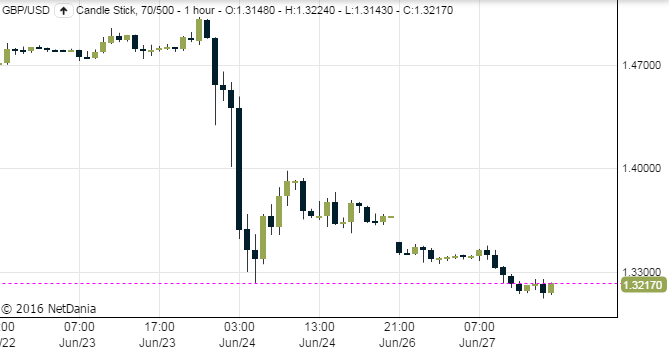 The Pound then sank a further 2 cents to new 31-year lows against the Dollar, while shares in giant retail bank Barclays and the part-nationalized RBS were suspended after sinking 15% by lunchtime.
UK government bond prices pushed higher again, as did all major sovereign debt, pushing 10-year Gilt yields below 1% for the first time in history.
Ten-year US Treasury yields fell to 1.46%, only just above summer 2012's all-time record lows.
German Bund yields fell to new record lows of minus 0.12% per annum on Berlin's 10-year debt.
"The immediate aftermath of the UK referendum result continues to be positive for gold," says a note from commodity analysts at Chinese-owned banking giant and London vault operator ICBC Standard Bank, "with the metal advancing from Friday's close against all major [currencies].
"With yields already low and under further pressure globally, the opportunity cost of holding gold continues to diminish."
"The political situation also remains unstable outside the UK," says a note from commodity analysts at German financial services firm Commerzbank, pointing to "the repeated parliamentary election in Spain" which failed to win a majority for the incumbent People's Party, leaving acting prime minister Mariano Rajoy to try and build a new coalition.
"Speculative financial investors significantly expanded their net long positions again before the 'Brexit' referendum," Commerzbank adds.
Net betting on Comex silver contracts also set a fresh all-time record last week, according to data from US regulator the CFTC.