END_OF_DOCUMENT_TOKEN_TO_BE_REPLACED

GOLD PRICES fell through $1270 per ounce for the first time in 5 trading sessions in London on Monday, retreating as the Dollar rallied on the FX market following Friday's weaker than expected US jobs data, writes Steffen Grosshauser at BullionVault.
After the official non-farm payrolls report said the US economy added the fewest jobs in seven months in April, weak international trade data from China today saw the Dollar rebound to the highest levels in almost 2 weeks on its trade-weighted index against other major currencies.
China's exports shrank almost 2% last month from a year earlier, while imports sank by 10%.
Shanghai's stock market fell sharply to an 8-week low on the news, while Western equities cut earlier gains as crude oil also retreated after rallying amid the Canadian wildfires that shut half of the country's oil output over the weekend.
Silver fell to $17.25 per ounce – down almost 5% from last Monday's 15-month high.
"Gold held on to a lot of the [recent] gains despite the strengthening Dollar, it seems to be well supported," says analyst Daniel Hynes at Australian banking group ANZ.
"Investors certainly saw the payroll numbers being a positive in terms of no rate hike in the shorter term, which lessened the blow of that stronger currency."
"As the chance of a June interest rate rise softened somewhat," adds Swiss refining and finance group MKS's Asian trading desk, "we should see gold once again test above $1300 following the recent consolidation."
Latest positioning data from US regulator the CFTC say that hedge funds and other money managers grew their net speculative betting on higher gold prices to the largest size since October 2012. 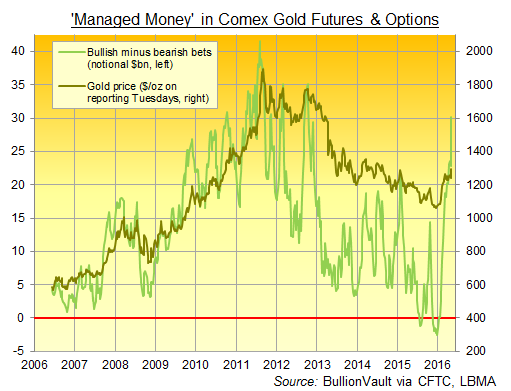 Swelling by a notional $32 billion since December's negative readings, the net spec long for 'Managed Money' traders has never grown faster on the CFTC's 10-year data series.
Investor sentiment on the economic outlook in the Eurozone has increased so far in May, according to data from research group Sentix, but " uncertainty over the looming Brexit vote likely is a key driver of investors’ cautious outlook," reckons consultancy Pantheon Macroeconomics.
With the Bank of England meeting Thursday to vote on interest rates – now at 0.5% since March 2009 – "the central bank will not react to the vote unless real panic sets in," Pantheon says of the 23 June referendum.
British support for staying in the European Union is currently at 42% while support for leaving is on 40%, according to a YouGov opinion poll for ITV television.
Gold priced in Sterling ended Friday in London with its second-highest weekly close since the rebound of summer 2013 at £890 per ounce.
The FTSE-100 held unchanged Monday even as the German Dax moved 1.4% higher and the French Cac40 rose 0.9% for the day.